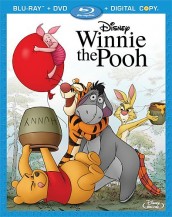 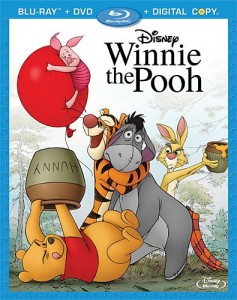 WINNIE THE POOH – I can’t express how much I love this movie. It is sweet, it is smart, it is funny and it is right for everyone no matter what age. The classic tale of WINNIE THE POOH gets a new spin from Disney with a whole new adventure involving from 100 Acre Wood. The great thing here is that while Pooh is on center stage, Owl, Rabbit, Piglet, Tigger, Eeyore and Roo all get time to shine. When Eeyore’s tail goes missing all of the characters begin a frantic search to find a replacement. But things get even more complicated when a case of mistaken reading by Owl causes everyone to begin to fear a monster known as the “Backson”, all the while Pooh tries desperately to get a hold of some “hunny” to fulfill his rumbling tummy. The animation is top notch and very clever, the original story is fun and funny and just a great time all around. The special features include an additional story with Pooh, some fun games for kids, a look at making the animated film and much more. Recommended for anyone with kids that enjoys being entertained as well. 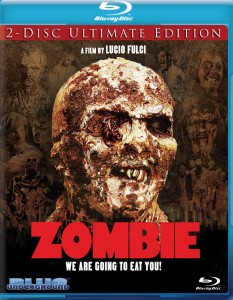 ZOMBIE: ULTIMATE EDITION – Anytime a zombie is battling a shark to the death under water, it has to be a good thing, right? The classic undead film from Italian master Lucio Fulci was billed back in the day as the “unofficial sequel” to DAWN OF THE DEAD and known as ZOMBIE FLESH EATERS all over the place and banned in a few countries. Not sure why, there is nothing really all that outrageous in the movie – at least by today’s standards and considering what we have seen in films such as SAW, HOSTEL and many other gross outs. However, considering how bad most zombie films are, this one is definitely one of the better ones of the Euro-zombie bunch, topping it off with the infamous scene where the zombie and shark got at it to the death in splendid hilarity. The very cool thing here is that it has been remastered to high definition in its original uncut and uncensored form. So you get the movie as it should have been in stunning Blu-ray. And they should really have a Megazombie vs. Ubershark film on SyFy that would totally rock. 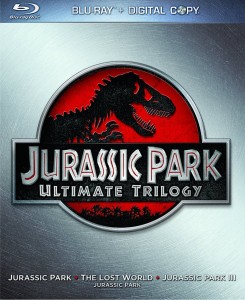 JURASSIC PARK TRILOGY – Finally, the dinosaur action-adventure series is getting its day in high definition. This is the first time that any of these three films collected together here have appeared on Blu-ray and they look pretty damn good. When you look at many of the other dinosaur series and films that have come out over the years, even more modern films, they are dwarfed by just how good the creatures look in these movies. While the second film is probably the weakest of the bunch, they are good to re-watch and will be something many older kids will find extremely fun. Now that they are on Blu-ray with all the legacy special features intact and with a few additional extras here and there, it is definitely worth owning. 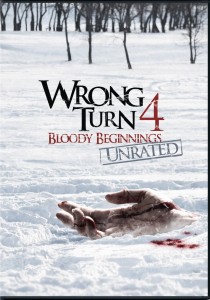 WRONG TURN 4: BLOODY BEGINNINGS – The horror franchise gets another twist with what is the origins of the inbred cannibals, which apparently started when a group of brothers were locked up in a mental institution and escaped. They then systematically killed and ate everyone that was keeping them in the joint. The shacked up in the mental facility and apparently no one came to check on them over time because they still reside there when a group of young people take a wrong turn and end up at the institution during a snow storm. Of course, it doesn’t go well for the young people as they too are eaten and killed in brutal ways. The WRONG TURN series has never shied away from the gore or blood and we love them for it but this more lambs to the slaughter rather than any real plotline outside of a so-called “origin.” Still, worth checking out for gore fends – you glorious bastards that you are. 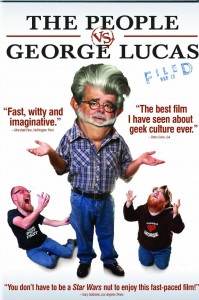 THE PEOPLE VS. GEORGE LUCAS – Ever wonder what all the STAR WARS nerds mean with their mass amounts of T-shirts and swag that says “Han shot first”? This documentary on the rise and fall of George Lucas among STAR WARS fans has the answers to this burning question as well as many others including how a whole clan of nerds (this one included) can go from idolizing the director/writer to despising him for what he did to our beloved franchise. It is the history of when the films first came out, the first tinkering with the films in the form of special editions, to the release of the new trilogy and more. It is a fascinating watch and one that I felt at my core as well. 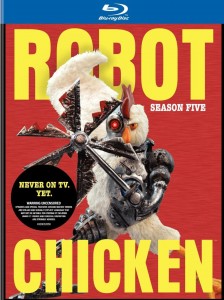 ROBOT CHICKEN: SEASON FIVE – you know what is cool about the DVD/BD format is that you sometimes get special stuff that you wouldn’t find anywhere else. Take the fifth season of ROBOT CHICKEN. Not only do you get 11 episodes that aired from the show on Cartoon Network but they have thrown in nine additional episodes that never aired on the network. That’s pretty cool. They could have offered them up as another season or whatever, but here they put them in this DVD/BD to give something to the fans. They also included 50 deleted animatics, seven additional scenes that didn’t make the cut and loads of commentaries from different voice-over talent from the show. That’s a load of good stuff on a DVD and shows that Seth Green and company are giving the fans something for their cash.

THE AVENGERS: EARTH’S MIGHTIEST HEROES: VOLUMES 3 and 4 – The AVENGERS are hot with the film slated to come out in the next year and all the superhero movies featuring members of the team in individual films. This is the modern take of the comic in animated form with another two volumes of the show collecting episodes 14 through 26 including fighting the Masters of Evil, Kang the Conqueror, Black Widow, Ultron, Hydra and the Asgardian Gods. If you are a fan of the comic, this doesn’t follow it quite right but all the classic characters are here with a new twist and some decent animation. 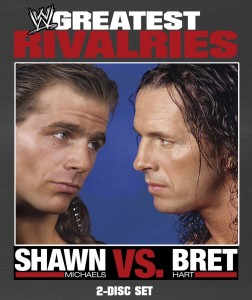 WWE SHAWN MICHAELS VS. BRET HART: WWE’S RIVALRIES – Among the legacy and lore of the WWE, there may not have been a more bitter and heated rivalry than that between “The Showstopper” Shawn Michaels and Bret “The Hitman” Hart. Not only did they fight for the title on more than one occasion but outside the ring they disliked each other with a passion. Now, all of these moments are captured on spinning plates including the great “Montreal screwjob” in which Vince McMahon took the belt off the leaving-the-company Hart in the most heated way – calling for the bell himself while in his own finishing move without him knowing it. It was one of the first times that real life had crossed over into the fake world of pro wrestling. A must have for fans and those that love history of the sport.

Article Source: Assignment X
Article: Blu-ray and DVD Picks of the Week including WINNIE THE POOH