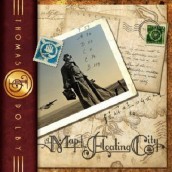 ©2011 RedEye
Thomas Dolby - THE MAP OF THE FLOATING CITY
Reviews

CD Review: Thomas Dolby – A MAP OF THE FLOATING CITY

The ‘She Blinded Me With Science' singer creates an interesting mix of master pop craftsmanship, lounge music and a cheeky sense of humor

Thomas Dolby may be best known for his 1982 pop hit “She Blinded My With Science,” but anyone who has dug deeper into his catalog has discovered a wealth of wonderfully eclectic and cleverly constructed tracks. I’ll always had a place in my heart for “My Brain is Like A Sieve” from his 1988 release ALIENS ATE MY BUICK and it always reminds me there was more going on with this artist than he was given credit for.

However, his studio output has been few and far between, with his last official release being 1992’s ASTRONAUTS AND HERETICS.

Thankfully, he’s back with the release of A MAP OF THE FLOATING CITY – originally tied to a transmedia game (revolving around an alternate history to ours) that debuted this summer called THE FLOATING CITY. He’s compiled songs from the game as well as tracks from two EP’s released last year.

The result is a bit uneven if you take it in as one complete album, but segmented like it is with four tracks making up the first part dubbed URBANOIA, the second AMERIKANA and then OCEANEA, then you might be able to appreciate the shift in tones and styles (there’s a lot of the challenging stylistic shifts previously displayed in Dolby’s 1984 release THE FLAT EARTH).

Clearly URBANOIA is the strongest set of songs. All four tracks are Dolby digging deep into his pop roots with “Evil Twin Brother” (sung with Regina Spektor) being a stand-out track. This is the playful side to Dolby that has made him such an intriguing and ground-breaking artist. It’s catchy, fun and you can’t get the chorus out of your head.

AMERIKANA provides some mid-tempo country-fied tracks. “The Road Reno” has the wonderfully playful line “She Sold Brassieres at Sears”

Though the song “The Toad Licker” is a bit on the annoying side, “17 Hills” redeems this portion with a sprawling seven-minute smooth Americana track featuring guitar work from Dire Straits singer-guitarist Mark Knopfler.

Finally the album concludes with the three tracks that consist of OCEANEA. It’s really somber and at times a bit sleepy after the disc’s great start – but it also shows a whole other side to Dolby than we’ve previously seen there’s even some harmonica playing in the last track “To The Lifeboats” which is a great closer.

While the transmedia component is definitely groundbreaking for an artist like Dolby to be involved in, it was the process by which A MAP OF THE FLOATING CITY was recorded in that makes it all the more fascinating.  The studio is called “Nutmeg Of Consolation” and was built inside a 1930s lifeboat as was powered by renewable energy.

Very cool. Hopefully this newfound appreciation for modern technology, social networking, online games and self-distribution will serve Dolby well and we won’t have to wait another 20 years for his next official full length release.