Political and funny as Mexico finally wises up 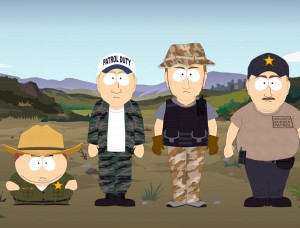 With “The Last of the Meheecans”, SOUTH PARK provides a pretty funny episode that takes on Border patrol agents, illegal immigrants sneaking into this county and Cartman once again going to extremes to win at something.

While the humor here is not totally laugh out loud, it’s a solid run on spoofing America’s current problem with illegal immigrants sneaking into the U.S.A.

The episode starts with the South Park kids playing a little game of Border Patrol Agents and Meheecans (I guess cowboys and Indians is over for this new generation). If the kids playing Meheecans get over the border, they win. If they don’t, then Cartman (who’s a Texas Border Patrol agent) wins.

However, Meheecan Butters  gets lost in the woods and is still determine to get over the fake play border the kids have constructed. However, a wealthy couple thinks Butters is a real Meheecan and takes him in. Eventually, he’s left at an El Pollo Loco where he starts a rebellion where Meheecans decide that America is not that great of a country and they’re better off in Mexico – creating a mass exodus of people trying to cross the border BACK into their country.

Oh, and Butters becomes a Mexican symbol of hope or something.

“The Last of the Meheecans” does what SOUTH PARK does best – take a topic like illegal immigrants crossing the border and turning it on its head. Like many episodes of SOUTH PARK this season, there is a scattershot feel to things, but the good news is that it all connects by the end pretty fluidly.

The best moments come from Butters living with the rich couple – who give him room, shelter and a leaf blower. Very funny stuff.

After the angst of the midseason finale “You’re Getting Old” and the follow-up last week “Ass Burgers,” SOUTH PARK definitely has its mojo back and is back to being a pretty effortless equally opportunity offender.