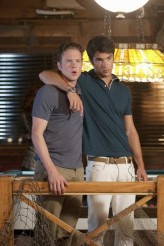 Emily gets a two-fer when she goes after the shrink 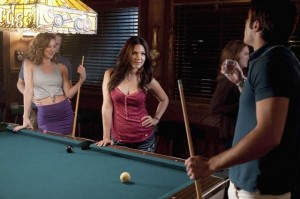 Ah, the sweet havoc goes on as Emily Thorne (formerly Amanda Clarke) goes on her revenge-ridden spree to ruin the lives of everyone who was involved in the false accusation of her father David (James Tupper) during one summer in The Hamptons. Hence the plot of the new ABC series REVENGE. Thorne’s principal targets are Victoria and Conrad Grayson (Madeleine Stowe and Henry Czerny), and in tonight’s episode “Duplicity”, Emily sideswipes Victoria as she goes after Dr. Michelle Banks (Amy Landecker), the local psychologist who also happened to have worked with Amanda when she was little, trying to turn the little girl against her father.

To add to the complications, Emily’s interest in Daniel Grayson (Josh Bowman) gets deflected by Daniel’s college buddy Tyler (Ashton Holmes), who’s still hanging around the Grayson place. Seems Tyler’s out to split Daniel and Emily up, and Emily’s partner in revenge, Nolan Ross (Gabriel Mann) thinks Emily would be better off with her old friend and bar owner Jack Porter (Nick Wechsler).

Two reasons why this episode works better than last week’s. One, it’s not all about Emily’s attack on her current target. Two, it isn’t following the same formula. Emily gets her shots in early, but the fun is in watching Victoria try to deal with the hurt caused by Emily’s very public taking down of Dr. Banks.

Victoria and Conrad are starting fray a little, what with all these scandals. So it seems logical to wonder when folks are going to start suspecting that strange girl in the old Clarke place. Oh, wait. This show isn’t about logic, so it’s safer just to pack away that part of it and just enjoy the trauma. There seems to be plenty to go around.