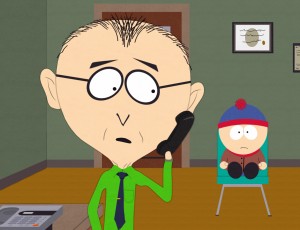 June’s mid-season finale of SOUTH PARK  ended on the brilliant “You’re Getting Old” episode where Stan realized that by turning ten, the world had literally turned to crap and he had become a miserable cynic.

The episode ended with his parents getting a divorce and Stan moping around town as the Stevie Nicks song “Landslide” played.

It was a brilliant end to an uneven Season 15, and as the second half of SOUTH PARK returns with “Ass Burgers,” we get the pay-off that was four months in the making.

As the episode begins, Stan is living in an apartment with his mom. His parents are still divorced/separated and Stan is still miserable. Then the school realizes, because of his obvious depression, that he must have Asperger’s due to school vaccinations the year before.

When Stan is sent to visit other Asperger patients, they reveal that Asperger’s is not a real disease and they too see the world like Stan does. The world is crap, because there are aliens or cyborgs or something out there pulling strings to control the way we see the world. With alcohol, he can go back to a blissful state and infiltrate the world and stop these evil beings that are hiding the “true” world from us.

Naturally THE MATRIX is a heavy influence on this episode and it’s pretty funny throughout. I love the idea of our heroes being so drunk (in order to see the false world) that they can’t function as heroes. There are also many call-backs to gags from the “You’re Getting Old” episode including the JACK AND JILL movie starring Adam Sandler and the duck president.

“Ass Burgers” crams in a lot of story into its running time and elements are bit all over the place, but it’s still pretty fine episode. It’s funny, clever and thankfully continues the cliffhanger of “You’re Getting Old.” Yes, it tries to put everything back into place, sort of, by episode’s end, but it kind of has to, doesn’t it.

Let’s hope the rest of the season is as strong as “You’re Getting Old” and “Ass Burgers.” SOUTH PARK can be hit or miss, but damn if this this pair of episodes hasn’t broken new ground with the show and really taken it to a whole other serious level. Most TV series that get ultra-serious crash and burn, but only SOUTH PARK can pull of that tricky dynamic and make it work so effortlessly.