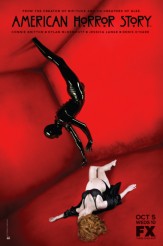 It’s difficult to do serialized straight-up horror on a weekly television series, which is probably why almost no one ever tries it. Before anyone cites, for example, THE X-FILES and BUFFY THE VAMPIRE SLAYER, let us remember that the former had as one of its mottos “I Want to Believe” and “Trust No One” as the other, while the latter used monsters as metaphors. In neither case was alienated, bloody horror the actual intent. Both shows actually revolved around people who were tasked with stopping the things that went bump in the night. While the original NIGHT STALKER telefilm was genuinely scary for its era (1972), the subsequent series was more jokey than jittery and the remake was too slow to work up much of a sweat.

David Lynch gave the genre a quasi-whirl with TWIN PEAKS, but that was often more surreal than terrifying, and again, there were some authority figures who at least had a handle on getting things under control. HARPER’S ISLAND was a thirteen-week edition of FRIDAY THE 13TH, which got more points for being gonzo than for raising goosebumps. THE WALKING DEAD does have honest-to-goodness gross zombies attacking people, but it is still more survival drama than scarefest.

With their new series AMERICAN HORROR STORY, GLEE executive producers/creators Ryan Murphy and Brad Falchuk try for authentic terror. True, they also have some domestic drama and a little bit of pure camp in there, but mostly, they pull of what hasn’t been seen on TV, broadcast or cable, since certain episodes of MASTERS OF HORROR. It’s early going, so who knows if they’ll be able to sustain the tone they set in the pilot, but if they do, this will be a kind of original horror novel for television, with a length that allows for multiple story threads and a sensibility that allows for true dread and fear, as well as some inventive gross-outs.

There are no remotely helpful authority figures at the heart of or even on the horizon in AMERICAN HORROR STORY. Instead, after a prologue that introduces us to the lethal house that is permanently inhabited by sheer malevolence that takes many forms, we meet the Harmon family as they move from Massachusetts to Los Angeles. Mom Vivien (Connie Britton) is still mourning a grisly miscarriage and still enraged at husband Ben (Dylan McDermott), who responded to her grief by having an affair. The move is Ben’s way of trying to distance the family from the recent past.

Then there is teenaged daughter Violet (Taissa Farmiga – yes, Vera’s younger sister), who like most adolescents is generally alienated, but siding with Mom in the post-infidelity cold war. The amazing, enormous house is priced astonishingly low – the realtor says it’s because of a recent multiple murder on the premises, but that’s not the half of it. The place comes complete with a maid who looks very different depending on who is seeing her (older Frances Conroy to Vivien and Violet, younger Alexandra Breckenridge to Ben), not to mention all sorts of phantoms.

There’s also imperious neighbor Constance (Jessica Lange), whose Downs Syndrome-affected daughter (Jamie Brewer) calmly tells people that they’re going to die in the house. As if all this weren’t enough, Ben’s new high school-aged patient Tate (Evan Peters) takes a shine to Violet – and has Columbine-style fantasies about what he’d like to do in class. Add to the mix Larry Harvey (Denis O’Hare, TRUE BLOOD’s Russell Edgington), a former tenant of the house who claims the place made him do terrible things, plus the Rubber Man, and the elements are all there for madness and murder.

The most sympathetic and sane figure here is Britton’s Vivien, and we feel enormous concern for her. McDermott’s Ben is actually trying to do the right thing, but between his ego and his impatience, we can see that he’s going to be susceptible to all sorts of things. There’s a very strong scene between the two characters, beautifully played by the actors, which delineates exactly what went wrong in the marriage and how both Vivien and Ben would like to find their way back to each other but may be too angry to do so. Violet’s adventures at school make us like her as well.

However, while Murphy and Falchuk (a million miles from their other currently on-air creation GLEE) certainly do right by the family drama aspect of things, the heart of AMERICAN HORROR STORY drips with its title element. Murphy as the pilot’s director borrows from the best. The opening episode pays homage to Stephen King, Roman Polanski, Clive Barker and a whole host of other horror maestros while combining the pieces in wonderful new ways. Some parts are over the top, but that’s fine. It has occasional gore, lots of disturbing and bizarre imagery, tons of mythology to explore and a becoming sense of madness and mystery.

The show makes us afraid of what we can see, what we can’t see, what’s around the next corner and makes us want to know all about it. It’s a kind of horror nirvana that practically never appears in series form on American television. If AMERICAN HORROR STORY can maintain the tone set up in its first episode, horror fans are in for a terrific time. Those who are not horror fans are advised to stay far, far away.