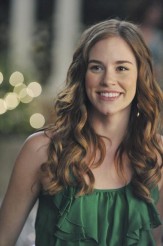 Emily's next target is a politician - too easy

One of the devout wishes I had for REVENGE, a supposed modernized look at THE COUNT OF MONTE CRISTO in which Emily Thorne (Emily Van Camp) seeks to trash everyone connected with her father’s wrongful arrest and conviction for crimes he did not commit, was that it would not turn into Emily’s victim of the week. Alas, the show seems to be headed in just that direction.

The show is set in the Hamptons, where Emily (who used to be Amanda Clark) has rented the house where she lived with her father David Clark. Next door is the home of the Grayson family, ostensibly headed up by tycoon Conrad Grayson (Henry Czerny), but we all know that it’s his wife Victoria (Madeleine Stowe) who’s the real power in the family. Naturally, Victoria had an affair with David Clark back in the day, but that doesn’t seem to count for much. Supposedly complicating matters (although it’s pretty hard to tell) is Victoria and Conrad’s son Daniel (Josh Bowman).

In “Betrayal,” Emily has set her sights on Tom Kingsley (Yancy Arias) the attorney who convicted her father, now a senator, by setting him up at a fundraiser. Computer geek and general help to Emily, Nolan (Gabriel Mann) is up to sending scary text and video messages to the senator, and we all know where that’s going.  In the meantime, Jack and Declan Porter (Nick Wechsler and Connor Paolo), sons of the local tavern keeper, have to work through the death of their father. And Emily has got another date with Daniel, who makes good on his decision to own up to his own wrongdoing.

Now, the problem is that it’s really, really hard to tell if Emily is genuinely touched by Daniel’s confession or if she’s just playing along. Alas, Van Camp only seems to have two notes to play – the angry, vengeful one and the smiling nice girl one, and it’s hard to say whether it’s the way the character is written or if Van Camp just doesn’t have the range.

It sometimes takes a series a few episodes to find its rhythm, even one that had such a promising start. So-o-o-o-o, let’s give this episode a pass and see what happens next week.