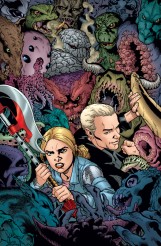 After Season 8’s long and scattered production schedule amounting to 40 issues for the season, Dark Horse is planning a much scaled back comic for Season 9, but that could be they are also launching concurrently ANGEL AND FAITH – the new ANGEL series from the publishing house.

“Everyone felt that it took too long at 40 issues,” Allie says. “So this season is going to be 25 issues. Both titles [BUFFY and ANGEL AND FAITH] will be 25 issues long. There will be some concurrent mini-series that will be shorter that will go along with both series. Both will launch at the same time, both will end at the same time over the course of approximately two years.”

BUFFY THE VAMPIRE SLAYER – SEASON 9 will launch at the beginning of September, while ANGEL AND FAITH will debut two weeks before that at the end of August.

Allie also revealed that Joss Whedon will be co-writing BUFFY along with DOLLHOUSE and THE VAMPIRE DIARIES TV writer Andrew Chambliss. Whedon will be writing the first issue of Season 9.

“[Joss] said he really wanted to be involved,” Allie said. “So he has been making the time. He is writing the first issue of BUFFY, he’ll be co-writing the other issues, he’ll be editing the scripts. Pretty much the same way he did in Season 8.”

And what of Willow and her unresolved feelings toward Tara?

“Not gonna say what we have planned for Tara in Season 9 but let’s just say that Willow has some major trauma ahead of her,” Allie says. “Willow maybe has reacted the least well at the end of Season 8 and she will be feeling that daily in the series.”

How big of an impact will Giles’ death have on Season 9?

“The repercussions of Giles death is in some ways is what Season 9 is all about,” Allie says. “There will be flashbacks featuring Giles and everyone will have to deal with what that means.”