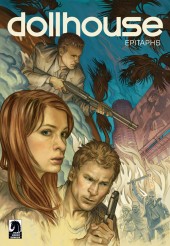 But is Season Three not far behind?

While speaking with ASSIGNMENT X during an exclusive interview at WonderCon 2011, Dark Horse Senior Managing Editor Scott Allie reveals that DOLLHOUSE: EPITAPHS one shot comic book is just the beginning of the story for the company. Get ready for a five-issue mini-series with hinted plans at more if things go well.

Allie also admits that while Dark Horse was on board about doing a DOLLHOUSE comic, Allie says, they were unsure about whether creator Joss Whedon would be down for supporting it.

“Joss was unsure about doing a DOLLHOUSE comic and he came up with the EPITAPHS episodes, he said this is how we could do the comics … if we do the comics,” Allie says. “What eventually got us to do [the comic] was that Fox came to us and said they wanted to do a DVD insert and they wanted to do a comic. So Joss said, well if you do it, you can do an EPITAPHS thing. And we asked Joss if we can do more and he said ‘yes.’ So, he and put together an additional 12-pages along with Andrew Chambliss [who co-wrote the DOLLHOUSE TV series finale].”

But that’s not all as the one-shot that piggybacked on the DVD release is just the start.

“The one-shot has just come out and now we have a five-issue series coming out starting in July,” says Allie. “And rather than launching a big, huge season like with BUFFY, we are doing a five-issue series, then taking a break. And we’ve got a basic vision for what’s coming after that mini-series, but we are not going to reveal those plans at this moment.”

While we know that Whedon is going to be very hands on with the BUFFY – Season 9 comic and have a vested interest in the ANGEL AND FAITH book, what about this DOLLHOUSE mini-series?

“He is relatively hands off because Jed Whedon is handling the comic,” Allie says. “He approves what we are doing and put in some guidance but Jed and Mo [Tancharoen] were pivotal in getting the TV show up and running so they are capable with the comic.”