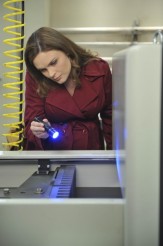 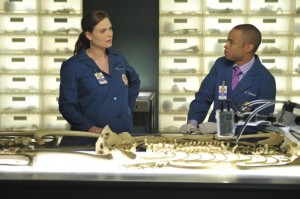 “Dead letter office” gets new meaning in the BONES episode “The Male in the Mail,” with human remains discovered in a postal facility for undeliverable packages. This is intriguing, as is the realization that a great way to dispose of a body is to mail it to a nonexistent address (with a likewise fake return address), insuring that it will go unnoticed for ages.

Unfortunately, “Male” doesn’t really follow up on this bit of genius. While Booth (David Boreanaz), Brennan (Emily Deschanel), et al are trying to get to the bottom of the case, Booth’s beloved grandfather Pops (Ralph Waite) announces that Booth’s alcoholic, abusive father has passed away. Booth at first doesn’t want to discuss it at all, until Pops points out that, however Booth felt about his father, Pops has lost his son. With Brennan’s help, Booth is eventually able to acknowledge that he does have some good memories of his father.

In subplots, Brennan’s pregnancy is causing her to behave in somewhat flaky fashion in the lab (she absently massages her sore breasts in front of her confounded male intern Clark, played by Eugene Byrd) and Booth deals with his eager-beaver FBI underling Shaw (Tina Majorino).

There’s nothing wrong with any of this, except that the pieces don’t quite fit together. The episode has a really tone-deaf note early on, when Brennan proposes that she and Booth move to Costa Rica. Forget about Brennan’s insensitivity to Booth’s love of his career – he is involved in raising his young son, who lives in the D.C. area. Since the boy is even mentioned by Pops later on in the episode, it’s hardly as though the writers forgot he existed, so it’s a little unpleasant that either Brennan did forget or else didn’t think Parker matters enough to for his existence to factor into Booth’s plans.

This would seem a level of extreme nitpicking, except that “Male” is determined to be heartwarming about Booth coming to terms with his own father. At least Pops calls Booth out on his lack of sympathy for the older man’s loss. Waite plays it all beautifully and honestly.

It also seems a shame that more isn’t made of the novel method of corpse obliteration, which turns out not to be the act of a brilliant psychopath but rather a desperate copy shop employee. True, mundane people have flashes of inspiration, but the ordinariness of the perpetrator is a little disappointing, given the nature of the crime.

“The Male in the Mail” has some terrific moments. They just don’t quite seem to fit together as a whole.