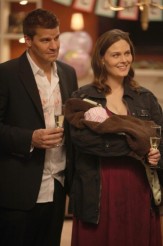 The romantic comedy procedural returns with an episode that is sweet, important and has a good mystery purring away beneath it 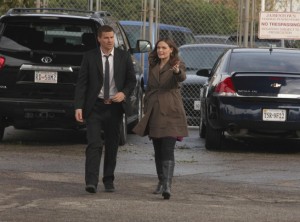 To get the big spoiler out of the way up front – and it can’t be that big a spoiler, given how pregnant Brennan (Emily Deschanel) was when we last saw her – Brennan and Booth (David Boreanaz) have their baby in the BONES episode “The Prisoner in the Pipe.” The episode is warm, respects both the integrity and the wishes of both main characters and, rather than separate them from the rest of the cast, reinforces BONES’ appealing sense of family.

The title does not (directly, at least) refer to the about-to-be-born infant, but rather to the corpse de jour, who turns up in pieces in the city plumbing system. After an amusing opening sequence (well, maybe not so amusing to real-life parents struggling with toilet-training their offspring right this moment), the Jeffersonian team try to figure out how the victim got down the drain and who put him there. The search leads to a prison, where Brennan insists on mingling with the population, much to Booth’s display. Brennan’s logic is that, as prison code frowns on those who harm children, she will be safe as she is obviously pregnant. However, no sooner do she and Booth get a confession from the killer than Brennan goes into labor. Unable to reach a hospital in time, Booth winds up as Brennan’s midwife in – yes – a manger. When they get home, their friends from the lab have arranged a surprise party.

For fans who were worried that a solid relationship and a baby would ruin the Brennan/Booth dynamic, these fears should be put definitively to rest by an early sequence in the episode. Booth, traditionalist that he is, wants Brennan to have the baby in a hospital. Brennan wants to have the baby at home and is so vociferous and specific about why she doesn’t want to give birth in the hospital that she manages to dissuade many people within earshot. The scene is very funny, full of character and even includes some BONES-esque tech, with Brennan using a fluorescent light to show blood and bacteria in the seemingly spotless hallway.

The birth scene is what has been earned – tender, good-hearted and neither melodramatic nor too long. Deschanel and Boreanaz both play adoring parents very well. As for the episode’s forensic elements, we’re right there with the characters, wondering how the body got into the sewage system. The answer is a good one.

Pruitt Taylor Vince doesn’t have much to do in his guest turn as a questionable prisoner, but he gives the role his customary thorough professionalism.

“The Prisoner in the Pipe” does have a fly or two in its ointment. Once again, Dr. Sweets (John Francis Daley) behaves with a breathtaking lack of professionalism, this time because he’s being bribed with the promise of bonding by Booth. What’s Booth trying to bribe Sweet to do? Use his psychiatric advice to sway Brennan, that’s what. Booth should be ashamed of himself and Sweet should lose his license, as well as seek intensive counseling himself. For comparison, imagine if someone you knew said to you, “I’ll hang out with you if you use your job to lie to someone we both know.” The appropriate response would be, “No, and I don’t want to hang out with anyone who’d ask me to do something like that.” This quick subplot is meant to be funny; instead, it’s dismaying and creepy.

Otherwise, “The Prisoner in the Pipe” is a charming, engaging welcome-back for BONES and a fine first welcome to its newest and youngest cast member.