Not very funny and pretty disappointing. A jumbled mess of an Easter special.

It figures SOUTH PARK would eventually deliver a clunker at some point during Season 16 and that honor goes to the ambitious, promising, but ultimately flat “Jewpacabra.” 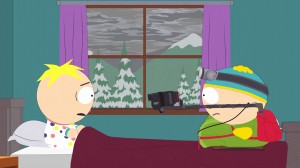 This will be known as the episode where Cartman finally becomes a Jew and understands Kyle’s pain, but a promising premise ultimately gets undermined by a lack of focus.

In what starts off as another way for Cartman to ruin a holiday (namely Passover and Easter), Cartman invents the legend of the “Jewpacabra.” It’s under the guise of a special SOUTH PARK titled CARTMAN’S PASSOVER HOLIDAY SPECIAL:  JEWPACABRA and this creature “drinks blood, hides in the night and has no belief in the divinity of Christ.”

As Cartman stirs up a frenzy (namely trying to stop the Sooper Foods supermarket chain from canceling their annual Easter egg hunt which is all about “fun and safety.”  To make his point, he goes into the woods with Butters in an attempt to prove the Jewpacabra exists. Soon, the episode has Sooper Foods tethering Cartman to a cement block in the middle of the park in bunny suit with  blood lathered over him as a sacrifice to the Jewpacabra – Super Foods has to make sure nothing disrupts their Easter Egg hunt.

Cartman is ultimately drugged by some Bigfoot hunters who think Cartman is the Bunny Man – and shoots him with a tranquilizer gun. This is where the episode gets weirder – Cartman starts having a delusion that he’s living in ancient times. God is angered and frogs rain from the sky. Cartman is a little Egyptian boy and by not accepting Judaism, he’s doomed to die. This delusion scares Cartman into accepting Judaism.

There are a few funny bits in here, but it is really odd and strange. I get what creators Trey Parker and Matt Stone were going for, but it really flies all over the place.

The good parts of the episode focus on the horror elements – whether it’s the homage to THE THING with the logo for JEWPACABRA or the found footage racket where the littlest piece of non-existent spooky footage over analyzed. I also liked the nod to IT’S THE GREAT PUMPKIN, CHARLIE BROWN at the very end.

The stuff that doesn’t work is last half of the episode that doesn’t know where it wants to go or what it wants to do. It’s like Parker and Stone decided, “this is the episode Cartman becomes a Jew” but didn’t really find a truly hilarious way to deliver on that statement.

You can’t win them all, and Season 16 has been so good, so far, that one really big misfire is not going to mess with the mojo the show has consistently had this year. Sure, this should have been better, but at least Parker and Stone tried to do something new.