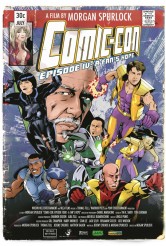 Loving and knowing, illustrative without a pejorative slant, COMIC-CON EPISODE IV: A FAN’S HOPE is a documentary that simultaneously celebrates fandom and somewhat explains it to non-fans. Filmmaker Morgan Spurlock, whose previous work includes the documentary SUPER-SIZE ME, gets comments from a plethora of geek gods (including his producers, who include Joss Whedon, Stan Lee and Ain’t-It-Cool-News founder Harry Knowles) while following the adventures of several ambitious attendees at the 2010 San Diego Comic-Con.

Even the film’s title is fannish. If the EPISODE IV: A [SOMETHING] HOPE doesn’t jog your memory, you are either in the part of the audience who may view the documentary as an anthropological study into a social group known of but not really comprehended by the larger world (like the Amish or residents of the Brazilian rain forests), or else you are so enmeshed in one particular fandom that you’ve never had time to notice STAR WARS.

Comic-Con, of course, has plenty of time for STAR WARS, STAR TREK and all forms of other movies and TV series that have spawned followings. Some long-timers voice observations tinged with regret that Hollywood is displacing the original attraction of the event: comic books.

However, even though Comic-Con arguably “blew up” into the giant, city-eating event it has become due to the participation of the film studios and TV networks, Spurlock’s documentary gives a lot of space to comic books. Two of the convention attendees we follow, Eric Henson and Skip Harvey, are artists and aspiring comic book illustrators who are here to get their portfolios seen by the comic book publishing companies. A third main figure here is Chuck Rozanski, proprietor of the astonishing Mile High Comics store, who heads into Comic-Con worried about sales figures. James Darling is hoping to propose marriage to his girlfriend in a suitably dramatic setting. Holly Conrad has marshaled a small group of friends together to do a presentation for the convention costume contest based on the videogame they all love, MASS EFFECT.

The costume contest segment has an astonishment factor going for it – Conrad and her crew go at their task with the intensity of a choreographer and dancers preparing for opening night on Broadway. The level of skill and detail is extraordinary. One of the costumes is topped off by an animatronic head worn by the performer. There are science-fiction films that make it into theatres with less professional effects, but it’s for love, bragging rights and the chance to win enough money to fund next year’s costume entry.

It’s intriguing to see what the process is for both the artists and their potential employers and Rozanski’s scenes provide a fair amount of insight into both the passions and the economics of the comic book world. Darling’s quest to propose under just the right circumstances has great low-key charm.

The film also has a good deal of “look over here, this is cool” at the various sights, sounds and quirks of the event, along with some indelible bits with Comic-Con celebrities. Watching Stan Lee work a gauntlet of admirers so that each feels appreciated, we get a sense of what the prolific comics writer gets out of meeting his peeps; hearing Joss Whedon talk about going into almost inarticulate awe when meeting comics creator Neal Adams, we see that some of these folks have empathy for their fans.

The film is designed to look something like a comic book, with artwork of each of the protagonists moving things along. These segues have a pleasingly visceral kick to them – we’re primed to be excited by what will happen next through these interstitial bits, and the footage that follows justifies our excitement.

COMIC-CON EPISODE IV: A FAN’S HOPE doesn’t attempt to be comprehensive. It supplies some back story on Comic-Con, but it’s certainly not the definitive history of the convention. While there is some discussion of how films, television and videogames have weighed the convention in a direction its creators never envisioned, that isn’t the point either.

What it does do, splendidly, is provide an intelligent, informative view of various aspects of fannish culture to outsiders. For fans, it’s COMIC-CON EPISODE IV: A FAN’S HOPE is an evocative, celebratory star-studded home movie. For those who want to experience Comic-Con without the crushing crowds, travel time and expense, it’s the perfect 88-minute outing.