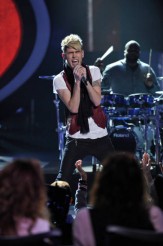 Yet, here we go again with an overall poor choice of songs from a classic era

Another week has gone and 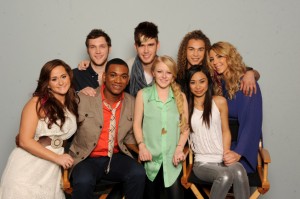 the field has trimmed to eight on the world’s greatest karaoke competition, AMERICAN IDOL.

This week the karaoke kids are singing songs from the 80s because why not sing a bunch of songs that have no barring at all on music today in a competition to find the singer who will best represent SONGS OF TODAY. Whatever, its IDOL logic that never makes any sense.

Just a bit of rant before I break down the performances … could they have chosen worse songs from the ’80s to perform? I mean seriously DeBarge? Bette Midler? Simply Red? Are you kidding me? At least Foreigner was something, but damn with all of those years and all of those good songs in there (and bad ones), surely they could have had a better selection.

Anyway, let’s get this party start with those that mostly come out at night … mostly.

DeAndre Brackensick
Song: “I Like It” by DeBarge
What I Thought: Apparently, America went along with what J.Lo said about voting for DeAndre last week as he was not in the bottom three – although should have been. Unlike the judges, I just can’t understand the appeal of this guy. He looks like a mop, he sings like neutered failed experiment and has all these odd facial expressions when singing. This was a bit better than his previous performances but I still don’t understand the appeal. Someone want to help me out on this?
What the Judges Thought: Jennifer liked it a lot and thought he was comfortable on stage. Steven called it totally captivating. Randy thought that DeBarge would have loved it.
Grade: C+

Elise Testone
Song: “I Wanna Know What Love Is” by Foreigner
What I Thought: When I used to work for a newspaper, there was a running joke about the use of Foreigner in headlines when it related to illegal aliens. It was always amusing. Such as “Foreigners Want to Know What Love Is” or “Foreigners are Cold As Ice” or “Foreigners Feeling Hot Blooded”. Helped pass the time. This was an interesting choice for Elise, and by interesting I mean really bad. Why go from blowing the roof off and being one of the best of the night with Led Zeppelin last week to a slowed-down not-even-close-to-the-song-for-her-voice type song. It was just wrong from the start and never got any better. Hell, Warrant would have been a better choice. After climbing her way out of the bottom for the past few weeks with strong performances, this just was flat.
What the Judges Thought: Steven loved her voice but he didn’t like the song (this is Steven’s way of saying, it blew monkey ass). Jennifer said she looked beautiful (which is Jennifer’s way of saying, it blew monkey ass). Randy basically said it blew monkey ass.
Grade: C-

Phillip Phillips
Song: “That’s All” by Genesis
What I Thought: I said this last week and I stand by it. I’m souring on Phillip Phillips. It isn’t so much that he sings poorly, because he’s great. It isn’t so much his stage presence, because he has it in spades. It’s the same stuff over and over again. Every song sounds the same, regardless of genre, regardless of time period, regardless of theme of the week. Now, Dave Matthews’ fans obviously love him and that’s cool, they want the same s*** over and over again. Me (and I imagine others) maybe want some variety. So I could see this becoming a factor in the weeks ahead. This week, no doubt he’s safe.
What the Judges Thought: Steven loved everything (because he said love 20 times). Jennifer didn’t like the beginning but loved the ending. Randy thought it was another great performance.
Grade: B

Joshua Ledet
Song: “If You Don’t Know Me By Now” by Simply Red
What I Thought: I’ve harped on Joshua the last few weeks because he has refused to break out of his mold as a gospel singer. Unfortunately, this was just another of the same style from Joshua and I’m beginning to get that same feeling as with Phillip, that eventually he’ll become a casualty of people wanting variety and his shtick of making it all choir-related will run thin. It’s already run pretty thin with me and that’s really too bad because he has an amazing voice, and there was nothing at all wrong with how this was sung.
What the Judges Thought: Jennifer called it a powerhouse performance. Steven called it over-the-top and a perfect song for him. Randy wanted to give him a song-long standing ovation.
Grade: B

Jessica Sanchez
Song: “How Will I Know” By Whitney Houston
What I Thought: This was definitely a different song for Jessica, who has been doing a number of powerful ballads and songs throughout the competition. This was one of Whitney’s biggest bubblegum pop songs and it showed how she could sing more toward her age. While that’s great, it was pretty much a note-for-note rendition of the song – which is certainly different from her Beyonce tune from last week. Jessica is not going anywhere but I would not say her best performance. Plus, Whitney? I thought we put a moratorium on Whitney, The Beatles, Michael Jackson and Mariah Carey songs.
What the Judges Thought: Jennifer said her vocals were amazing. Steven said everything she does is beautiful. Randy said she did an amazing song and loves her maturity.
Grade: B

Hollie Cavanaugh
Song: “What a Feeling” by Irene Cara
What I Thought: I’m old. I couldn’t think of anything but Jennifer Beals pouring the water on her. Any child of the ’80s probably thought the same. The funny thing is that the majority of these karaoke kids weren’t even born in the ’80s. If there was ever a quintessential ’80s song, this is it and finally one of the better song choices of the night. But, did Hollie, who was in the bottom three last week, do enough to pull her out of the doldrums? Doubtful. She was all over the place and I’m not just talking about her moving all around the stage. She might be around one more week but if she doesn’t turn it around she’ll be quickly a casualty.
What the Judges Thought: Steven said it was slow getting there but the pitch was all over the place. Jennifer said she needs to let go and thought the song was not a pop song and she needs to loosen up a bit. Randy loves her voice but there were pitchy moments and she’s over-thinking her performances.
Grade: C

Colton Dixon
Song: “Time After Time” By Cyndi Lauper
What I Thought: Skunk boy went all blonde; oh you can hear the tweens going crazy. I’ve never been a big fan of dudes singing songs that were originally sung by chicks but surprisingly this worked quite well for Colton’s rockitude. Colton is the Daughtry of this season, being the rocker that is taking a lot of songs we know and turning them into his own style. Whether he wins this whole thing or not, he’s going to make a ton of money and break all the tweens hearts along the way. He’s slowly moving into the pole position of this whole thing.
What the Judges Thought: Steven said he could do an album right now. Jennifer said he was sync with the band and talked about a journey or something. Randy said he made it their own and thinks he’s extremely current.
Grade: B+

Skylar Laine
Song: “Wind Beneath My Wings” by Bette Midler
What I Thought: Well, crank my tractor, it was amusing to see Hillybilly hoedown’s return home to her trailer park where she wrestled up some Jimmy Dean Sausage mixed with Pepper Jack cheese, road her ATV and shot at some coon. What did Jeff Foxworthy used to say?: You can take the redneck out of the trailer but you can’t take the trailer out of the redneck? Hilarious! I can’t really comment on the performance because my ears bleed whenever I hear “Wind Beneath My Wings” and I end up in the fetal position. So, I’m abstaining because seriously, I hate this song with a passion so much my body shuts down.
What the Judges Thought: Randy loved the way she looked and was her best performance to date. Jennifer said don’t count out Skylar (who probably thought “Count on what?”). Steven said it was the perfect song for her.
Grade: n/a