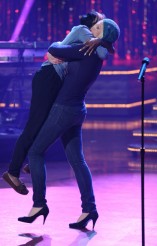 I was amused after the final round of “Hollywood Week” on the world’s greatest karaoke competition, AMERICAN IDOL, over how excited people were to go to Las Vegas.

Yeah, I guess the excitement of moving along is one thing, but it’s not like they are going to some great place where they can all do something fun. Half of the people are under 21 and that means no gambling. And as I said before, you can get a pretty cheap room during the week if you try hard enough.

But I guess when you are from some Podunk town in the middle of nowhere, Vegas is pretty damn exciting.

All I know is one thing, if they don’t keep Heejun Han just for comedic value, the show is doing something terribly wrong. Also, I would love to see what Reed Grimm could do in the main competition given his impromptu drum performance from the last episode

I’ve complained long and hard about IDOL being two hours each episode and this week we got four freaking hours of it but during this time when we are actually hearing some of the good stuff, it is worth it.

So instead of having them sing contemporary songs as they have during every other round in the competition, they had them sing songs from the 1950s. Uh, what? The judges are the first ones that talk about the singers not singing for the modern times and singing too old (or too young in some cases) so you throw all that out and make them sing songs they have never heard before? Makes a lot of sense. What is even funnier is that most of the people watching this episode don’t know these songs either, so why go that way? Defies logic but we are talking about IDOL here so I guess it just goes with the territory.

At least we got more of the run-up to who the final contestants might be which is nice considering in past years they just breezed through it and gave us a Top 24 that we may or may have not even seen before. This way we get a whole bunch more of the people who will be singing for your votes when they eventually get to that point. A big improvement from previous years. As far as pure showing talent, this was the best show of the year. Hopefully it continues.

Here’s a list of the people that made it to the next round that they have profiled quite a bit so far on the show (again, probably missed some):

Those that didn’t make it pretty much those that they haven’t shown either at all or not very often, which makes sense obviously. But some that you have seen much of were cut including:

So the Top-40 has been determined. Next week we get the Top-24 and then presumably the Top-12. Should be interesting as there are a number of strong contestants remaining.