Were you expecting something different this season? I hope not. 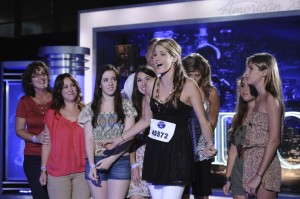 I found the premiere episode of the 11th season of the world’s greatest karaoke competition, AMERICAN IDOL, extremely amusing. No, not because of the lack of talent that was displayed traditionally, but because they focused on how many talents have come through the show in that span.

I’m amused because it has been 10 years of going through these painfully bad auditions – again, not talking about the lack of talent, but the very fact that they keep showing these losers, freaks and delusional and/or mentally challenged people despite constantly telling the viewing public they will focus on the actual talent.

It is like the biggest ongoing joke at Fox. I imagine some Mr. Burns-type character sitting in a Fox office somewhere on the 666 floor saying to his henchmen “How many people will we con in watching these terrible audition episodes that seem to linger on forever with the promise that we’ll actually show them just the good people? Muhahaha.” And yet, millions still do.

I guess maybe I’ve seen too many “fail” videos or too many Youtube wannabes crash and burn that seeing someone that obviously has some sort of mental deficiency isn’t entertaining, it’s sad. Someone should have put the kibosh on letting them get that far long ago. Yet, year after year, IDOL shows them in spades – even spotlights them – despite the ongoing joke of focusing on talent.

Plus, is it me or does it seem too soon for all this again? I think it is THE X-FACTOR aftertaste. We just did one of these shows on Fox, why are we here again? My boss and I were talking about how he thinks IDOL is one of the shows that will stand the test of time regardless of the fact X-FACTOR was just on TV or that THE VOICE (which actually offers up some intriguing differences compared to IDOL) is competing against it at the same time. I think this is the year that IDOL takes a major hit. Obviously, we’ll know today or over the course of the season but I just feel there are others out there that see this has just too much musical talent/karaoke competitions for one viewing public to bear. I could be wrong, I am often very wrong when it comes to IDOL, but once and a while I get it right, as anyone who has read my reviews of the show for the past five or so years will attest to.

As for the talent … meh, it is always hard to remember those that did well because there are like a dozen audition rounds and by the end, whoever was showed first is blended into everyone else they have shown. It is only until the Hollywood Week when we really get to see who does well. So until then, it is the same schtick you’ve seen for 10 years now, enjoy.

Anyway, beyond this rant, as maybe I should call it not a review, here’s what I took away from IDOL on opening night: