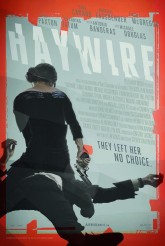 The physical action is impressive, though the overall tale is not new

There are few if any movies where CIA agents and their allies are perfectly comfortable with all of their work colleagues. It’s therefore no big surprise to the audience when government “private contract” black ops specialist Mallory Kane (Gina Carano) gets burned by someone she trusted. It’s not surprising either, what with HAYWIRE being an action movie, that the more Mallory understands she’s being messed with, the more butt she kicks. What is surprising is the dexterity that Carano brings to the dramatized violence. Carano comes from the world of real-life mixed martial arts. She’s gorgeous, but her persona is winsome rather than mysterious – she’s more Sydney Bristow than Evelyn Salt. However, when she lashes out with punches, kicks and chokeholds using many different body parts, she is quite spectacular, giving HAYWIRE all the justification it needs for existence.

The film begins as Mallory enters a little middle of nowhere diner. Alas, former colleague Aaron (Channing Tatum) has followed her here and wants her to come with him. Mallory refuses, forcefully but not lethally. Innocent bystander Scott (Michael Angarano) jumps into the fray to protect the lady – at this point, he’s unaware of just how well Mallory can defend herself – and winds up with Mallory commandeering both him and his car. At Scott’s insistence, Mallory then recounts all that led to her current predicament; the film thereafter jumps back and forth between the recent past and the present.

Mallory’s old boss/ex-lover Kenneth (Ewan McGregor) is reluctant to call on her for her services, but new and powerful client Coblenz (Michael Douglas) insists. Mallory’s troubles begin when she agrees to run the rescue of a Chinese dissident who has been kidnapped in Barcelona. The mission, which pairs Mallory with the initially very friendly Aaron, is apparently successful. Then Kenneth sends Mallory almost immediately into the field again, this time toDublin, where she is meant to play half of a power couple with fellow operative Paul (Michael Fassbender). All hell breaks loose and Mallory lands in one kill or be killed scenario after another.

Narrative-wise, Lem Dobbs’ screenplay feels familiar, but it does provide for some innovative settings and fight staging, made the most of by director Steven Soderbergh. Between the relative novelty of seeing Barcelon aand Dublin play themselves in an American blockbuster-style film and the impressive speed of the fight moves, we are nearly always in the moment watching HAYWIRE, even if the part of our brain meant to be teasing out the spy thriller aspect isn’t greatly engaged.

Of all the hand to hand combat sequences, the most striking (pardon the pun) is the one involving Fassbender. Fassbender hasn’t trained for years as a fighter the way Carano has, but he tackles the scene with a ferocious intensity that makes it riveting. McGregor has fun with the smarmy Kenneth, Douglas is suitably authoritative and oblique as Coblenz, and Antonio Banderas and Bill Paxton are effective in other key roles.

HAYWIRE isn’t much of an espionage mind-teaser, but that’s not really the point here. Instead, HAYWIRE is a movie that knows what it wants, which is to showcase the athletic prowess and personal charm of its star Carano. It achieves this goal stylishly and entertainingly.