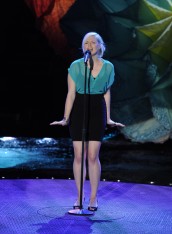 It was once again time for mass amounts of drama on the world’s greatest karaoke competition, AMERICAN IDOL, as we dwindle the remaining 42 contestants down to a svelte Top-24.

And then the real competition begins and we can all start voting and kick off the really good, cute chicks because the tweens hates chicks and keep in a bunch of terrible singers that have no place in the competition and … huh, what’s that you say? We still have another episode after this one? But … they spent two hours getting us all prepared and narrowing it down to 24 people to vote on. Now, they’ll spend another hour kicking off the people we had to sit through tonight? Seems like a waste of time. What’s that you say? Oh, right, AMERICAN IDOL, waste of time is its middle name.

First, I gotta get this out of the way, what the hell was Seacrest wearing tonight? He looked like a 20 years younger David Hasselhoff. Bad look man, bad look. What happened to the nice suits? Dude, you are a big tool, you need to look as good as you can otherwise jerks like me get all over your case.

Anyway, as said before, mass drama.

Each remaining contestant gets called up to the judges’ little rotunda of doom in order to get examined for a musical colonoscopy right after being told one last time to sing, monkey, sing. Then the judges who have already made their decision and could care less about the last song you sing, judge them.

The whole rotunda of doom was silly, it was something out of A CLOCKWORK ORANGE with a dark tunnel with evil mist bubbling up as they walk away from the light. Then they emerge into this circle of vivid colors and psychedelic lights all with screens of themselves singing in the background. All that was missing was the prongs to keep their eyes open.

Hell, why not go all the way with it:

Thinking more about this, I believe I have just created the greatest reality/death show in the history of mankind.

Oh, the results. I nearly forgot.

Jen Hirsh was up first. After destroying every performance she was a shoe-in. And, of course, after drama, she was indeed in.

Creighton Fraker was next. He also did pretty good although during 50s night (or whatever they call it) they gave him some flak. And after J.Lo says something about “touching America” (giddity), he’s in.

Lauren Gray followed and after her highlight package it was clear she was on the fence. She did not make it.

Joshua Ledet was the next person to face the doom and after a strong performance throughout the competition, he’s in the Top-24.

Then they showed a bunch of people we have not seen at all this year getting the boot so no foul there.

Haley Johnson was next. She had a strong set of performances with each being better than the next so it wasn’t a surprise that she made it into the Top-24.

Neco Starr who didn’t get a lot of camera time but was shown here and there to be a solid performer but was given the unceremonious boot.

A couple of others who we never really saw got the boot and then Elise Testone entered the rotunda of doom. After showing her “journey” to this point, she gets the nod to move along to the next round.

Reed Grimm, who showed he has some serious talent by playing the drums and singing during one of the competitions, was next and if they didn’t move him along it would be a shame. Luckily, they did just that and he joined the Top-24

Erika Van Pelt who they showed really just moving along in the competition but not really too prominently and once again they did the same with her moving into the Top-24.

Baylie Brown and Chelsea Sorrell were next to enter the doom and you knew how they were setting it up only one was moving along. Chelsea moves along but sneaky IDOL also moved Baylie along as well.

Ritchie Law, whose name would make a great reboot for WALKER, TEXAS RANGER, was up after the break and karma comes back to bite him in the ass as he doesn’t go into the Top-24.

HeeJun Han, who was a great source of comedy during the competition and was Law’s arch-nemesis, followed. And again luckily for the viewing public he continues on in the competition.

Jessica Sanchez, who has rarely been seen until the last episode and this one, also made it through.

Phil Phillips, who was one of the early frontrunners because he wowed every time he got on the mic, and was a shoe-in to continue and he does indeed.

Colton Dixon, who nearly made it to the Top-24 last year, was next on the list. Remember how he didn’t want to compete this year and overshadow his sister (who got eliminated last week), did indeed overshadow her by moving into the Top-24.

Jersey chick Brielle Von Hugel followed and she was one that I’d say was definitely on the fence given her so-so performances. But she made her mom proud by making it into the Top-24.

Last up was Adam Brock and in true IDOL fashion they dragged it out and we have to find out until the next episode if he made it. Which means he probably did because otherwise they wouldn’t make such a big deal about it.

So we’ll see who else moves along as they couldn’t have just squeezed it all in during this episode of AMERICAN IDOL because that would be too easy. More rotunda of doom tomorrow!