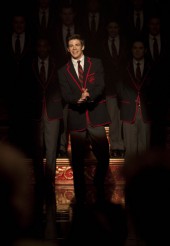 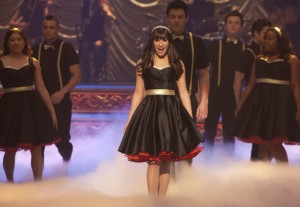 And so goes the roller coaster ride that we’ve come to know as GLEE. After enduring perhaps the worst episode of the season with “Heart,” GLEE rebounds with perhaps one of the best episodes of year with “On My Way.”

It’s like there are two different shows being made concurrently. On one hand is the GLEE marketing machine that makes song and story choices based on the music it wants to shoehorn in on a given week. This version of GLEE occasionally throws all logic and continuity out the window while also focusing on the wrong character or story arcs for reasons unknown to its loyal audience.

Then there’s the thoughtful, smart and richly textured GLEE that takes incredible risks and challenges which reminds us what we liked (and appreciated) about the series to begin with.

“On My Way” kicks off with another blackmail moment from Warbler baddie Sebastian (Grant Gustin), but then gets deadly serious when Kurt’s (Chris Colfer) former tormentor Dave Karofsky (Max Adler) is outed at his new school. It gets so bad, he attempts suicide.

Thankfully he survives, but this episode brings a sense of melancholy throughout. It gives the characters ample time to reflect on choices and their own struggles with identity and fitting in. This is beautifully written by Roberto Aguirre-Sacasa and it really tackles some hard-pressing issues happening right now in our school system (including bullying and suicide). I was hoping GLEE would use its platform, which has been one for tolerance and acceptance, to actually step up to the plate and discuss what happens when someone can’t handle being an outsider and looks for the worst possible solution.

Kudos for the show and its deft handling of this. It’s not heavy-handed and it’s the right balance of just about everything – including everyone realizing they should have reached out to Karofsky when they knew something was wrong, instead of him going down that dark and dangerous path. It’s also an episode about looking to the future and enjoying everything life has to offer.

The rest of the episode deals with Regionals – with the Warblers and New Directions going against each other the old school way by being the best each can be.

Don’t read further if you haven’t seen the episode.

Spoiler #1, is the obvious one, yes, New Directions wins and is headed to Nationals.

Spoiler #2 is not so obvious. There’s been a lot of build-up with Quinn (Dianna Agron) and potentially wrapping up her storyline before the season is up. And strangely, this episode ties up a bunch of loose ends only to have Quinn get into a terrible automobile accident as she heads off to the wedding of Rachel (Lea Michele) and Finn (Cory Monteith). She’s texting and then – a car slams into her.

I have mixed feelings for this little coda, since the Karofsky moments were handled so well. To kill off a major character like Quinn like this seems a bit dark and morbid, but, if they can make it work with the series, why not. However, it may be a little too much to have a potential suicide and probably a death in the same episode. We’ll see how all this is resolved.

Overall, this week’s song choices were top notch too – perhaps the best and most consistent in weeks. It also digs into a couple of under-the-radar bands including Young The Giant with “Cough Syrup” (giving Darren Criss as Blaine one of his best numbers in some time) and Halestorm’s superb “Here’s to Us” which gives Michele a shining number.

I’m curious why Sue (Jane Lynch) has become so mellow over the last batch of episodes (yes, they use her pregnancy as an excuse, but it’s a strange turnabout). If this is growth, it’s nice to watch, but it’s also changing the Sue we know. I did hate her constant need to destroy glee club and glad that stopped. I think it’s important the character have this kind of enlightened arc, but I also would hate to see Sue revert back to her old ways. That would be cheap. The writers seem to be building toward something here, but the way Sue is being written, and Lynch is playing it, it seems like Sue is in a deep depression (and it’s kind of a buzz kill too). I’m willing to give this time to sort out, but it almost feels like Sue’s time on the show is kind of done and the series needs a new villain/antagonist to take her place.

Meanwhile, the Finn/Rachel wedding doesn’t veer into overkill, which I feared would happen. Instead, “On My Way” has an excellent balance. It’s bittersweet, and it makes you wonder how the whole Karofsky subplot will be handled in weeks to come and if, indeed, Quinn has bitten the dust.

Hopefully, whenever the GLEE writers veer off course, they’ll pull out this episode to remind them what the series can do when it really stays focused and strives to be more than just a typical TV series.