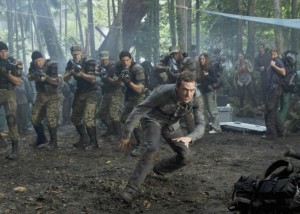 He talked to us in this exclusive interview about what he’s been doing lately, including joining the staff on FX’s upcoming  AMERICAN HORROR STORY, created by GLEE’s Ryan Murphy and Brad Falchuk.

ASSIGNMENT X: You said you were working on TERRA NOVA during the last days of the writers room at your previous project, THE CHICAGO CODE. Are you still involved with TERRA NOVA?

TIM MINEAR: I am finishing up now.

AX: How is that going?

MINEAR: That went great. I came in, I broke some stories with the staff, I actually wrote a script, although my name’s not on it, and helped out as much as I could, met a lot of nice new people. I was on my way somewhere else. I’m actually going to be working on Ryan Murphy’s FX show AMERICAN HORROR STORY that’s about to start. So I’m finishing up with TERRA NOVA, and then I’ll presently be starting with Ryan Murphy.

AX: Is there anything you can say about AMERICAN HORROR STORY? Is it supernatural, is it domestic?

MINEAR: It’s both of those things.

AX: Do the characters ever burst into song, like on GLEE?

MINEAR: No. Well, they might – I certainly don’t want to limit Ryan and Brad’s vision of what it can be [laughs], but it ain’t GLEE. It’s not even NIP/TUCK. It’s something else entirely. It is an adult cable scary series.

MINEAR: As involved as he always is. I mean, it’s an FX show, so he’s involved, very much so.

AX: You are also credited as being involved in the NBC series AWAKE.

MINEAR: I was, but I am not. That was something the studio [Fox] asked me to do, and then they decided they needed me at TERRA NOVA more. 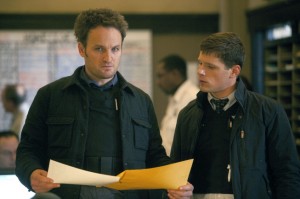 AB: So do you have a deal with Fox where you’re sort of like military personnel and you just get redeployed wherever they need you most?

MINEAR: A little bit, yeah. That’s a pretty good way of putting it. I’m on an overall deal and the truth is, after CHICAGO CODE, even before we knew [it wasn’t] coming back, the studio was very keen for me to meet with Ryan Murphy – well, first they were very keen for me to meet with Howard Gordon re. AWAKE. And I don’t need to be asked twice to work with Howard Gordon. I wouldn’t even have to know what it was. I would say yes. And I said yes. But while we were waiting for that pilot to start shooting, then they wanted me to meet with Ryan, so I met with Ryan, and Ryan liked me. Then he was finishing [the just-concluded season of] GLEE, and so there was a little more downtime and that’s when they decided that they needed me over at TERRA NOVA. So that’s what I’ve been doing. That’s where I’ve been relocated until further notice.

MINEAR: That’s where I’ll be going next.

AX: Are you a producer on that, or a show runner?

MINEAR: I will not be running it. I will be one of the writing producers.

AX: Who is the show runner?

AX: Is there any casting in place on that, or is it too early?

AX: Can you say what it is?

MINEAR: Yes. I can. It is Connie Britton –

MINEAR: Exactly. It is Dylan McDermott –

MINEAR: And it is Jessica Lange.

MINEAR: Exactly. That doesn’t suck, does it? When you put in the questions and responses to, “Is there any casting for AN AMERICAN HORROR STORY,” you need to put in your reactions, too. The “Ooh,” the “oh,” and the “holy s***” [laughs].

AX: Will do. [See above.] With AMERICAN HORROR STORY, do you feel at all like you’re returning to the Joss Whedon realm? You did spend a lot of time on ANGEL, which was supernatural … 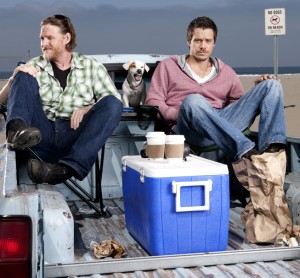 MINEAR: No, I don’t actually. ANGEL is a little bit more comic-book [than AMERICAN HORROR STORY]. The stuff that I did with Joss is what it is. The truth of the matter is, this might be more like my work on THE X-FILES in a weird way than the stuff I did with Joss. In a way, it doesn’t feel like any of that stuff. Now, I will say, it’s definitely a return to genre. I don’t think I’ve done genre [recently] – well, no, I just wrote a bunch of dinosaurs. Trust me, TERRA NOVA is a genre show. It has time travel. What’s funny is, there’s a character named Wash, there’s a character named Malcolm, there’s a character named Reynolds – I mean, I was, “Is this an homage to FIREFLY?” [Executive producer] Rene Echevarria promises me that he’s never seen FIREFLY [laughs]. Well, you bastard. I never watched DEEP SPACE NINE [Echevarria’s alma mater] either.

AX: Are you working on anything else – not that this isn’t enough – that we should know about?

MINEAR: I’m writing a pilot for Twentieth, that hasn’t been sold to a network. I’m writing it on spec. It’s also genre, but I think I’d rather not go into what it is. I keep hearing that we’re going to get TERRIERS DVDs and I keep waiting to get the call to come in and do commentary, but that hasn’t happened yet.

Let us know what you think – leave your comments below.

Click on link: AX’s exclusive interview with Tim Minear on the end of THE CHICAGO CODE and what Season 2 could have been

Click on link: AX’s exclusive interview with Tim Minear on DOLLHOUSE and what Season 3 could have been

Click on link: AX’s exclusive interview with Tim Minear on the end of  TERRIERS