THE CHICAGO CODE, created by Shawn Ryan and premiering tonight at 9 PM on Fox, is a police drama shot on location in the title city. While the series has its procedural elements, there is also an ongoing story about the efforts of the police superintendent, played by Jennifer Beals, and one of her officers, played by Jason Clarke, to bring down the intimidating yet charismatic corrupt alderman Patrick Gibbons, played by Delroy Lindo.

Lindo is no stranger to portraying antagonists – he was a memorable criminal boss in Spike Lee’s CLOCKERS and essayed Clarence Thomas in the telefilm STRANGE JUSTICE – though he’s played his fair share of straight-up doctors and officials, too, often in feature films. He talks about playing the multi-layered Gibbons and what brought him back to television. 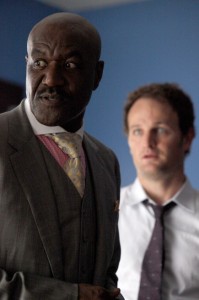 ASSIGNMENT X: Were you looking to do a TV show or is THE CHICAGO CODE what came along at the time?

DELROY LINDO: It’s what came along at the time. I was not particularly looking to do a television show. This came along, the timing was right and it was interesting. The idea of getting to play a politician and a Chicago alderman was interesting.

AX: Patrick Gibbons seems a little more open in most of what he’s doing than some of the other not-so-legal characters you’ve played.

LINDO: Yes and no. There’s that which people know about and that which people do not know about. There are things that I’m doing behind closed doors and there are things that the community of Chicago knows about. That’s completely true to life. I think playing a politician – that sounds very simplistic, but the fact that this man is a Chicago politician, an alderman – that world is extremely rich. So to be able to dive into that and examine that was not only interesting, but it was different from some of the things I’ve done in the past. I did not see him as a bad person, but rather as a person who did what needed to be done to achieve a certain result. And I think that is true of many politicians, but certainly in Chicago.

AX: Are you familiar with Chicago?

LINDO: My experience with Chicago was that I first went to Chicago in spring of 1983, right after Harold Washington had been elected [as mayor]. It was an extremely interesting time in the city. I then went back in the mid-Eighties, 1985 or ‘6, and had not been in Chicago since.

AX: How is it working there now?

LINDO: Obviously, it’s interesting, because some things have changed, and some have not. Chicago has always been really interesting architecturally to me. The skyline has exploded – the downtown is absolutely phenomenal and very dynamic. Some of the social dynamics have not changed. And it was interesting to be there now in the context of the mayoral race that’s about to take place, because as I said, the first time I went there, Harold Washington had just been elected, and now of course, the city’s embroiled in the new mayoral campaign.

AX: A lot of CHICAGO CODE’s writers and actors have talked about consulting with John Folino, who  is the series’ police consultant. Have you been consulting with him and/or done other research for your character?

LINDO: Yeah. I got together with some aldermen, and they were incredibly helpful. I ended up going to a number of city council meetings. I went to a couple of open houses that the aldermen have and spoke one on one with two or three different aldermen, so that was the nature of what I did to get a feel for what I had to do on the show. And let me just say this – my experiences, speaking with the various aldermen and seeing them in their element, didn’t necessarily translate in the specific in terms of what I was doing in the show, and I had to make that very clear to them also. But I think that it was really valuable for me and educational and fortifying for me to do it, because I’d like to think that you pick things up by osmosis, and while it may not have found its way into the work in the specific, certainly it helped to give me a feel for what they do and in some sense how to approach the work.

AX: And how is working on a TV production schedule as opposed to a feature film schedule? You do a lot more scenes, you’re doing a lot more character development, but you have to do it much faster. Do you wish you had a little more time to work on it all?

AX: Do you have anything other projects coming up in the immediate future?

AX: Anything else you’d like to say about CHICAGO CODE?

LINDO: To state the obvious, I’m always curious to know how audiences are going to respond. I hope audiences respond to it, that’s all.