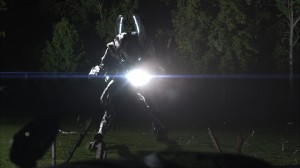 In TNT’s new science-fiction series FALLING SKIES, premiering this Sunday, Earth has been invaded by a heavily-armed, extremely hostile species of extraterrestrials colloquially called Skitters. Noah Wyle  heads up the cast as Tom Mason, a historian turned resistance fighter who is searching for one of his sons. The show reunites Wyle with producer Steven Spielberg, who also one of the executive producers on ER, where Wyle spent fifteen years playing Dr. John Carter. FALLING SKIES also brings Wyle back to TNT, where he starred in three fantasy adventures in THE LIBRARIAN telefilm series, which Wyle produced with Dean Devlin.

ASSIGNMENT X: Do you believe in aliens?

NOAH WYLE: I don’t spend a tremendous amount of time thinking about it, but I think as a ballpark [general] answer, we’d be incredibly egocentric to assume we’re the only things in the galaxy, and incredibly naive to think we’ll never bump into anything else.

AX: Were you involved in the development of FALLING SKIES, or did it come to you already somewhat formed?

WYLE: It was formed. We certainly tweaked that pilot script around quite a bit, and then in the year interim between shooting the pilot and committing to doing the series, they were wonderful about allowing me not only access, but empowering me to make lots of wonderful key decisions and that was one of the revealing aspects about this, was to have come from the safety of working and hiding behind an ensemble to suddenly having to step up to the forefront of one and take a real stake of ownership in what I’m working on, and to have people who are as talented as Mr. Spielberg and his creative team and [TNT executive vice-president] Mr. [Michael] Wright and his creative team to allow me to sit at the table is pretty great.

AX: How directly involved is Mr. Spielberg in FALLING SKIES?

WYLE: Initially, extremely involved, as he was with ER when it first came on the air. He watched all the dailies, he made a lot of editorial suggestions and casting suggestions, and then as his attentions were [required elsewhere], he sort of became less and less involved, but [he has been] extremely hands-on with this. Robert Rodat, who wrote SAVING PRIVATE RYAN, is the show runner, and they’re very close.

AX: Speaking of ER, do you miss it at all or do you feel that it was sort of like getting through high school and just came to a natural conclusion?

WYLE: That’s how I feel. And like high school, there are certain people that I’m going to miss who I probably won’t see, some people who I will, but we closed it out in such a satisfactory manner that I really have no regrets and I was able to close that door pretty firmly. 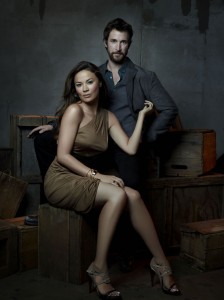 AX: What is the tone of Falling Skies?

WYLE: I’ll touch on [something said by] Will Patton about his preparation. Out of necessity, especially with this type of genre, it requires total immersion. You can’t ironically comment on a line or step outside the plot and give a little wink and say, “Look at what we’re doing.” You lose all credibility immediately. So as silly as it sounds to say, “The Skitters took my boy and I’m going to get him back,” you have to fully commit to saying it with all of its dramatic elements, so it’s a whole universe that we inhabited for a little while and then ran from back into our lives and now are trying to synthesize what the experience was for us on a personal level and what the show’s about on a creative level [in order to discuss it in interviews].

AX: Did you have any fears of what the dialogue might be like when you were told, “Your character’s a historian and he’s going to be laying out the explanation for all of this”?

WYLE: No. I’m a bit of a history buff in my private life and I looked at that as an opportunity to align myself with one of my personal hobbies. After fifteen years of medical gobbledygook [on ER], getting to speak English as opposed to Latin was a pleasure.

AX: Do you feel a different sort of professional responsibility when you are playing the lead, as opposed to being part of the ensemble?

WYLE: Yes and no. It sort of is a blessing and a curse. I have that weird gene that allows me to have an objective perspective on the work I’m doing, not just to focus on my little part, but to see how my part fits into the overall. When you’re on a show where you have absolutely no stake of ownership and you’re just a hired gun, having that overall perspective can be a detriment, because if you see something that could be tweaked or changed, you don’t really have the right to say so. So this was the first time I’ve ever had the right to say so and be able to exercise that. 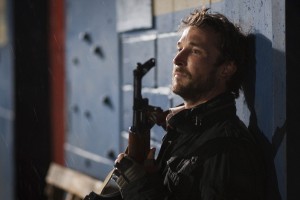 AX: Can you say what it is that you discussed with the other Falling Skies producers?

WYLE: I’d be hard-pressed to find something really significant. It’s sort of the two different kinds of artistic temperament. One form of artist creates something out of nothing, and another takes something that’s already been created and tweaks it and makes it different. I’m the latter. When they give me the template, then I can figure out how to fix it and make it better, but I can’t come up with a template. Tom Mason was pretty much what we laid down. It was a lot of how to pace out his maturation arc as a leader, how to pace out his ability to be effective as a fighter, how to pace out the relationships, specifically between me and my oldest son, which starts out very close and as the show progresses and he wants to cut some of those apron strings and exhibit more autonomy and independence, how to let that be a subplot that really ran through the show, so the characters were evolving and changing as the circumstances changed with the greater world. Probably the best thing I lobbied for was to keep Will Patton alive on the show for the first season and as many seasons as we can keep him for. 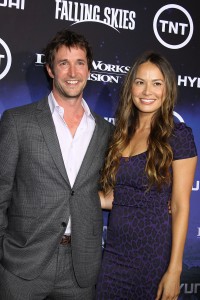 AX: How do you play off Will Patton, who plays the experienced military man of the group?

WYLE: In general terms, Will’s character, Captain Weaver, was a character that was supposed to be expendable early on in the series’ life. And it was only after we started playing together on the pilot that we realized the great value we have in not only the character, but in Will as an actor and how much dramatic value there would be to have these characters, who stand on opposite ends of the spectrum, have to deal with each other and learn from each other to a certain extent.

AX: Has playing a guerilla fighter affected the way you think about fighting at all?

WYLE: I’m still a pacifist at heart, but I have to say, firing a thousand rounds from a fifty-pound machine gun brings out the bear in anybody.

AX: Any flashbacks to this role once filming was over?

WYLE: I was in the kitchen and we were going to cook some dinner and I turned the gas on in my stove and when it catches, which I’d forgotten about, it makes this really loud “Wrmph!” sound. So we’re standing in the kitchen, I light this thing, I’m talking, talking, talking, and all of a sudden, “Wrmph!” And everybody in the room goes [makes a startled ducking gesture], because I had just spent five months [on Falling Skies]. I went into ninja stance. I was ready.

AX: Anything else you’d like to say that nobody’s asked lately?