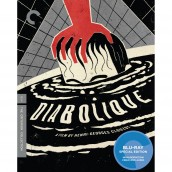 There are many classic horror films that every fan has seen – from PSYCHO, JAWS, HALLOWEEN and numerous others. And then there are films like 1955’s classic DIABOLIQUE that’s talked about, but rarely viewed. It’s a hugely influential film though, but it isn’t as familiar stateside and hopefully with this new release it will be more readily available for fans wanting to dig a little deeper into genre history.

The Criterion Collection has digitally restored this classic French thriller (which pre-dates Alfred Hitchcock’s PSYCHO by five years) and is directed by Henri-Georges Clouzot about a wife and her husband’s mistress who band together for a little sweet revenge on this abusive man. What results is a twisted game of cat and mouse with a surprise twist no one will see coming.

Filmed in black and white, the restoration really brings out the amazingly textured cinematography of the film. It’s so well put together and Clouzot’s expert use of suspense and clever camera angles really gives it a unique sense of style.

Although the film was horribly remade in 1996 (with ack! Sharon Stone), this 1955 original is a must-see for any die-hard horror fan. It holds up surprisingly well and the new transfer definition sprices things up.

Among the other special features, the original uncompressed monaural soundtrack brightens up the sound, selected scene commentary by French scholar Kelley Conway is quite informative, and the new video interview with the novelist and critic Kim Newman is very informative.

People forget the simplicity of older films like DIABOLIQUE and it’s companies like Criterion who puts a little T.L.C. with every release by going above and beyond. It’s clear this company is here for the true fans and they will do whatever it takes to deliver the best possible special edition and they’ve done it again here.

DIABOLIQUE is a stark, bleak and an incredible clever film and it’s finally getting the attention and home entertainment due that’s been a long time coming.