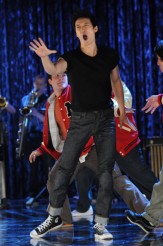 In the case of GLEE, the A- grade is not an Asian F, but signs that the show might be back on track 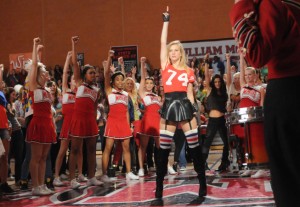 Is this what rehabilitation looks like? If so, GLEE – Season 3 may have officially started.

“Asian F” is one of those startlingly good episodes of GLEE – one that sneaks up from behind and reminds you why the show can be so good and focused when it wants to be.

Many of the fan complaints (myself included) have spoken about the lack of time spent on the core cast of characters and the willy-nilly approach to song selection. Heck, I’ve even been doubting that the show has the ability to inspire anymore, yet “Asian F” really gets back to basics and provides a solid hour with conflict, humor and emotion.

The subtle theme here is parenting – whether it be actual parents, mentors, lovers or friends – and how that can have either a positive or negative affect on someone.

While there’s an even division of story between several characters, it’s Mike Chang (Harry Shum Jr.) who the title of the episode “Asian F” is referring to.

His strict dad expects a lot from his son who seems to be spreading himself thin between his girlfriend, Glee club, football and his classes. And in chemistry class he got an A-, which is considered an Asian “F.”

With the threat of not being able to continue with New Directions, Mike is at a crossroads and torn between two worlds. There’s a little bit of DEAD POET’S SOCIETY here (and hopefully it doesn’t end in tragedy like it did there), but the emotion and writing for this usually under-served character is fantastic.

There’s even a heartfelt moment between Mike and his mom. Beautiful stuff.

Even though we’ve seen this before, there’s another diva war brewing between Rachel (Lea Michele) and Mercedes (Amber Riley). Both are vying for the lead of Maria in the school play of WEST SIDE STORY and both feel they deserve it. Mercedes gets a much needed morale boost, but then she goes off the rails with her “poor me” shtick. Then there’s the strange stomach pains and sickness. I really hope they’re not planning on making her pregnant – please, we’ve already been through this with Quinn (Dianna Agron).

Meanwhile Kurt (Chris Colfer) feels added pressure to win Student Class President as Brittany (Heather Morris) amps up her call for woman power. And when Rachel thinks she’s going to lose out on the part of Maria, she puts her hat in the ring for Class President as well – thereby alienating Kurt.

Finally, there’s the slowly evolving relationship between Mr. Schuester (Matthew Morrison) and Emma (Jayma Mays). He feels like he embarrasses her because she hasn’t introduced her to her parents. So he takes the initiative to invite them to dinner and realizes that they’re Ginger Supremacists (funny bit). We get a glimpse into why Emma is the way she is, and we also see a very strong and believable relationship blooming.

Song selection this week was also rock solid, even if it did rely once again on show tunes (two from DREAMGIRLS and one each from FAME and WEST SIDE STORY).

Riley nails the DREAMGIRLS tunes and they’re well choreographed, while Shum shows off his previously unheard vocal talents on “Cool” from WEST SIDE STORY.

And finally, in what didn’t seem like a possibility during the last two episodes, a great downloadable song emerged from the show. The Coldplay tune “Fix You” expertly spotlighted Mr. Schuester and his plea to stand by Emma as she works through her OCD. New Directions chimes in once the song picks up tempo and it has the same kind of transcendent effect that “Teenage Dream” had in Season 2 when it was sung by Darren Criss and the Warblers.

Of the things that are becoming more apparent – Mr. Schuester is no more Mr. Nice Guy. He’s in everyone’s face. He wants to win, but he’s also being a realist, not letting any of the students walk all over him anymore.

Rachel (and even Kurt) have gotten to be a bit too shrill and annoying in their pursuit of their dreams and wanting to be “somebody.” They’re becoming about as unlikable as Quinn, and that’s not a good thing to do.

And having Blaine (Criss) at McKinley High is one of the show’s worst ideas – ever. He doesn’t fit and in and it takes some of the magic away from the Kurt and Blaine relationship.

Oh, and once again, just like last season, here’s an episode that works without having Sue Sylvester (Jane Lynch) pulling some crazy stunts. It seems to me Sue works in duration and if they continue to have her pop in and out and not make her the focal point all the time, the show has a fighting chance of not getting stale even faster.

That said, “Asian F” fires on all cylinders. This is great writing and direction – and lives up to what GLEE should always be. The effects of having a writers room may be finally paying off for the show. It actually has me excited again that the GLEE could be back and track and ready to play ball again.