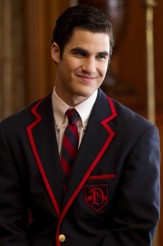 From obscurity to popularity in a little less than a year, the actor is loving the opportunity and exposure the popular Fox show has offered him 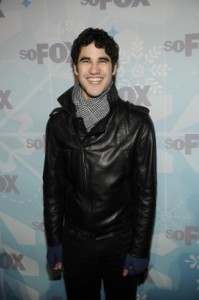 When GLEE co-creator Ryan Murphy revealed he wanted to find a compatible love interest for gay high school student Kurt (Chris Colfer) this season, everyone immediately assumed it would be Blaine (Darren Criss) – the prep school singing prodigy who has become best friends with Kurt.

It’s been a will they or won’t they dance, that Murphy and his fellow co-creators Ian Brennan and Brad Falchuk have managed tact and care.

For Criss, he admits he’s grateful and overwhelmed by the reception he’s received for his portrayal of the out and proud Blaine. It was a little over a year ago he was playing Harry Potter in the HARRY POTTER MUSICAL in Los Angeles, cut to a year later and he’s actually invited to the HARRY POTTER premiere.

While it’s still undetermined whether Blaine and Kurt will hook up, their budding friendship has proven to be one of the bright spots on Season 2 of GLEE and ASSIGNMENT X caught up with Criss to briefly chat about his newfound fame in this exclusive interview.

ASSIGNMENT X: The beauty and irony of this business, one year, a photo of you dressed in a Harry Potter costume appears in THE HOLLYWOOD REPORTER and a year later, everyone is talking about you.

DARREN CRISS: That is quite literally a year later, I was on the opposite end of that. What’s funny, underneath the caption in THE HOLLYWOOD REPORTER, they’re not saying “Darren Criss from the HARRY POTTER MUSICAL,” they’re saying “Look at this crazy nut outside the theater,” and the following year it was me [attending] the premiere. Things change. Conversely, the bad side about that, let’s hope I’m not completely gone by the end of next year. Let’s hope I can hold on to it.

AX: That’s a very important perspective to have though –

CRISS: All this is very humbling. I work on a show with extremely talented people. I’m connected to a character that has so many socio-political things behind the person you’re invested in and there are so many things that are bigger than myself. I kind of disassociate myself from whatever I read about this guy named Darren. Any response that has come from the show, is something I’m very proud of. It’s better than doing something you don’t really like and I didn’t kill anybody or release any sex tapes, so I’m very happy with the way this has come about. 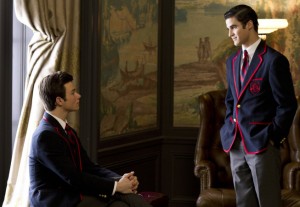 AX: With “Teenage Dream” I was amazed with how well the song worked sung by you and the Warblers and also how it fit into the show providing one of those great TV moments.

CRISS: There is something special in Blaine’s character. That’s something I’ve always been excited about. By no means did I anticipate the wonderful response we’ve received. That’s just a bonus. I was happy enough with the fact that a person like Blaine was a presence on a network television show – a popular show. That was enough for me. The fact people liked it so much, was a fantastic bonus. When you’re shooting stuff, it’s not what you see as viewers. I’m there, trying to hit my marks, I’m trying to remember my words and not make a fool of myself. It’s my second day on the job, trying to make a good impression and you’re doing a job and not until you get to step back do you get to see how it looks. I’m glad it turned out as good as it did.

AX: I heard you’re a big fan of BUFFY.

CRISS: Yes. I saw Joss Whedon two years ago at a party and I nearly fainted.

AX: Did you talk to him?

AX: What’s coming up the rest of the year for Blaine on GLEE.

CRISS: My favorite thing, a lot of pink elephants in the room are going to be addressed.

AX: So does that mean Kurt and Blaine become an item?

CRISS: Oh, I wouldn’t say that, but there is some trajectory to that, I’ll say that.