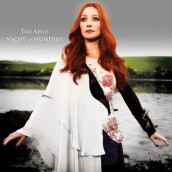 An uneven collection of dark, Gothic songs inspired by classical music that doesn’t quite soar to Amos’ previous heights

You never quite know which direction Tori Amos is going to zigzag in. She’s an avant garde pop princess who burst onto the scene in the early ‘90s as that decade’s answer to Kate Bush.

Her piano playing was impeccable and her knack for catchy songwriting with deep messages made her debut LITTLE EARTHQUAKES a phenomenal and still potent debut.

Since then she’s followed the beat of her own offbeat drummer with highs and lows. She never sits still long enough to question her decisions and her latest NIGHT OF HUNTERS is perhaps the most challenging work to date.

It’s inspired by classic music over the course of 400 years (you’ll hear Bach, Chopin and others throughout). It mixes her phenomenal piano playing with rich orchestral flourishes and while it’s not an entirely catchy combo, it is impressive in its scope and intent.

While Amos really stretches as an artist, there’s also a sameness to these 14 tracks. I’m not sure how classical fans will feel about the masters being mash-ed up, but I suspect Amos fans will either love it or hate it.

In fact, it’s the jubilant instrumental track “Seven Sisters” which might have been the better way to go – forsake the vocals and have Amos showcase her virtuoso piano playing with classical tracks. It might have actually worked much better in the long run.

NIGHT OF HUNTERS is an okay, if not perplexing release that will take time to grow on most listeners (if they give it a few chances to grow on them). I’m somewhere in the middle – enamored by the bold choices made, but wishing there was a little more accessibility (and eclecticism) to make it a more enjoyable journey.