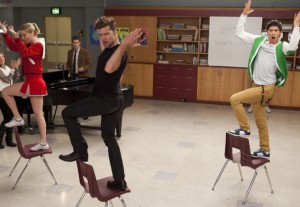 Throughout most of the GLEE episode “The Spanish Teacher” I felt bored, and then offended and finally, just plain confused.

I also felt a little violated as well, since after an episode of “Michael,” the series immediately dived in to another bit of stunt casting with Ricky Martin and the producers promised no theme weeks and less stunt casting this year. I guess they forgot that promise.

Thankfully, they didn’t force anyone to sing Martin’s signature hit “La Vida Loca” (including him).

Redemption in this episode did come in the form a tiny moments that did elevate things from being a train wreck, but largely, “The Spanish Teacher” felt like another GLEE bag of puzzle pieces thrown into the air and allowed to land wherever they fell with little connective tissue.

The episode begins with Spanish teacher Mr. Schuester (Matthew Morrison) embarrassing himself in front of his class with a racist interpretation of “La Cucaracha.”

A complaint is lodged and Mr. Schue decides to figure out why he’s so out of tough as a Spanish teacher – could it be that he’s Caucasian?

While I understand some of his intent in class was wrong, but to make him an idiot when it comes to Spanish – unable to grasp the basics of the language (and after three years of teaching it at the school), seemed to me to be rather unbelievable. And especially from a character that is genuinely a smart and fair person.

So what does Mr. Schue do? He takes a night school class from Spanish language class from David Martinez (Martin). Martinez brings fire to being a Spanish teacher and somehow, before this episode is over, he’s taken Mr. Schue’s job at McKinley.

Other nonsense includes Mr. Schue being a douche to his fiancée Emma (Jayma Mays).

Of the student dilemmas, we have Sam (Chord Overstreet) and Mercedes (Amber Riley) dealing with their attraction to each other, though nothing is resolved and I’m still not feeling a connection between the two characters.

And finally, we have Sue Sylvester (Jane Lynch) moping around the school in some sort of depression. She wants to have a kid – she feels she’s ready. And then, she starts to ask the students to give up their sperm so she can have a decent baby (not sure she legally can do that, and it’s a bit creepy) and then she asks Mr. Schue for his too!

I know they’ve been trying to soften Sue and give her some kind of arc after being defeated horribly in the fall in the election (among other things), but in neutering Sue, they’ve sort of done a disservice to Lynch. It comes off as if Lynch isn’t trying anymore as Sue, as opposed to trying to give Sue some kind of character growth.

Yes, the Sue character kind of sort of has run its course, but it’s also sad to have her moping around depressed – that is, unless, they pay all of this off (which I’m not sure they will).

The one thing I felt worked was an moment between Kurt (Chris Colfer) and Finn (Cory Monteith). Kurt gives him a lecture about being engaged to Rachel (Lea Michele) and that it seems like he’s giving up on his dreams to be nothing after high school. There was also a nice moment between Sue and Emma, where Sue explains why she wants Mr. Shue’s sperm. I get the sentiment, but that one nice line of dialogue is plopped into the middle of an outrageously inappropriate request (even coming from Sue’s skewed world view).

* How did Suger (Vanessa Lengies) become part of New Directions again? Yes, she was part of the Troubletones, but, it was clear at the beginning of the season she couldn’t sing and there was no hope for her. Has anyone forgotten that? Did she suddenly learn to sing? Why hasn’t this been addressed?

* Santana decides to complain about Mr. Schue because of the way he teaches Spanish. And at the end, Mr. Schue goes, “okay, I suck as a Spanish teacher, sorry.” Really?

* There is no way in hell a teacher can ask for student sperm. Please, stop making Sue Sylvester so creepy. That said, a complaint is lodged against Sue for not being 100 percent into coaching the Cheerios, but it’s okay to ask for sperm? Or being physically and verbally abusive to other students (which Sue has done in the past)? Or to do the numerous criminal things Sue has done over the course of three seasons? McKinley is a school in denial and should be shut down immediately.

Songwise, this episode was refreshing in that it offered up bilingual versions of songs and it broke up the rash of classic rock, Broadway show tunes and otherwise nonsense filler songs that tend to weave in and out of every episode.

Even though Mr. Schue’s matador performance was pretty lame, the bi-lingual reinvention of the Elvis Presley hit “A Little Less Conversation” was pretty fun. Riley was also fantastic on the Gloria Estefan hit “Don’t Wanna Lose You.”

After a string of strong fall episodes, GLEE is back to its old bad habits. Hopefully it pulls itself together and finds a way to send off the graduating students before the season is up. I’m losing interest and would prefer not to be tortured again with sloppy storytelling from an otherwise enjoyable series.