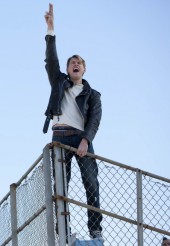 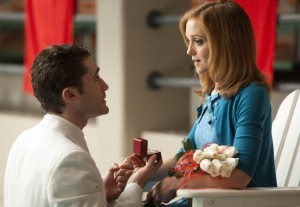 It’s amazing to me how much better GLEE has become over last year and the latest episode “Yes/No” really digs deep into characters and comes out on top with a wonderfully touching and emotive episode.

The theme, if you hadn’t guessed from the title is “Yes/No” – which deals with various characters all having to make very difficult decisions in the ways of love.

The episode kicks off with a GREASE homage with “Summer Nights” being sung by Sam (Chord Overstreet) and Mercedes (Amber Riley) digging into what happened with their summer fling (something that’s only briefly been touched upon). It’s nice to see the show use songs, every now and again, to enhance story strands that have been left by the wayside and this one was perfect. It also shows that both Sam and Mercedes still have a thing for each other.

The series then jumps into the mind of Becky (Lauren Potter), the Down’s Syndrome cheerleader that Sue Sylvester (Jane Lynch) has taken a liking to. She can sound like whoever she likes in her head, so we get narration of her sounding like Helen Mirren (who also provides the Helen Mirren voice).

Pretty cool stuff and a clever way of dealing with the character who hasn’t been given this major a play in an episode. Essentially, she’s on the prowl for man and has fallen head over heels with Artie (Kevin McHale). The two of them work as friends, but, unfortunately, Artie has to explain he’s not into her that way.

This is also the marriage proposal episode with Will (Matthew Morrison) deciding it’s time to propose to Emma (Jayma Mayes). The class assignment is potential proposal songs, leading up to a Busby Berkeley number in the school swimming pool by episode’s end.

Finally, getting caught up in the proposal craze, Finn (Cory Monteith) goes on a roller coaster ride this episode. First, he wants to join the military, like his dad, only to find out his dad was destroyed by war and became a drug addict. Then, he decides to propose to Rachel (Lea Michele) who doesn’t answer him (that’s saved for next episode).

While “Yes/No” was a solid episode, the episode does get knocked for essentially ruining the great arc for Coach Beiste (Dot Marie Jones) – by having her elope with her love interest Cooter and doing it off camera to boot. Come on, Beiste’s arc was one of the best of the fall season and this was such a Season 2 cheat.

The other interesting thing (and I say that it’s a good thing) about this episode is how Sue Sylvester has been neutered. Maybe losing her political campaign and losing the man has finally tamed Sue, but it was actually nice to see her be a character again instead of a caricature. She still gets off some of her one-liners, but they’re much more subdued, more grounded. And her moments with the kids at school and in particular Becky come off more nurturing than caustic.

Director Eric Stoltz shows his ability at directing musical numbers quite well – this is an amazingly big episode. And even the GREASE homage is pretty faithful to the original movie.

The biggest problem with GLEE now is the cast is getting way out of control in terms of size. Yes, they might be laying the groundwork for Season 4 (with some of the primary cast graduating and such), but many characters are still getting underserved. After Quinn’s terrible storyline during the first half of the season, she’s basically been reduced to a background player yet again.

Meanwhile, the Santana (Naya Rivera) and Brittany (Heather Morris) relationship has been completely clipped as well. And where was Brittany in this episode? Again, pushed to the background.

These are small quibbles in regards to the show overall. In terms of a single episode, “Yes/No” really delivered some great drama, solid music and great character progression.

Yes, the show can lose it’s way some of the times, but no, this wasn’t one of them.