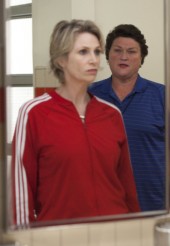 A surprisingly strong episode about Santana's coming out party 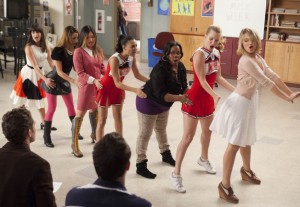 Consistency, that’s what I’m talking about and that’s finally happened with GLEE the last couple of episodes.

And with “I Kissed A Girl” we get another strong episode paying off the many story strands that have been set up over the first part of the season.

The primary focus is the de-icing of Santana (Naya Rivera). With the imminent release of the campaign video that’s going to out her, Finn (Cory Monteith) tries to save her from herself by giving her a ton of pep talk speeches (even if she doesn’t want them). He does get through to her, with the glee club singing a bunch of songs to her – showing her it’s okay to be who she is.

Then there’s the tragedy of it’s Coach Beiste (Dot Marie Jones) finding out that Sue has stolen her love interest Scooter.

And finally, you have Quinn (Dianna Agron) still acting all loony – and wanting baby sex with Puck (Mark Salling) who still has a massive thing for Ms. Corcoran (Idina Menzel).

Some of the best stuff happening this season has been with Coach Beiste and this week is no different. Jones is absolutely incredible – and she infuses Beiste with humor and vulnerability. There’s no character like her on TV and I pray the producers keep the character around for the long haul (it seems that way, but you never know).

The Kurt/Brittany election thing went on one episode too long. I was kind of over it going into this and the big twist at the end wasn’t really that much of a twist at all.

Rivera also gets some amazing writing this episode. While Finn is getting a little preachy, I do like that he’s trying to make peace with everyone – and seems to be growing a pair and taking charge for a change. Monteith performing an acoustic version of the Cyndi Lauper hit “Girls Just Wanna Have Fun” is the showstopper. Fantastic. One of his best numbers ever.

Rivera also gets s pretty tragic moment where she comes out to her grandma who she looks up to – resulting in her grandmother disowning her.

After complaining about how horrible Quinn has become, she’s been getting amply beat up by the other characters on the show as well. Puck gives her a mouthful and calls her out for being bats*** crazy.

It’s also nice to see the show address the recent rash of real-life gay teen suicides. This is one of the reasons Finn reaches out to Santana, because he doesn’t want her to do anything stupid.  I’m almost wondering if the series might address teen suicide head-on. I doubt it will be with Santana, but the one who is heading down that slippery slope is Quinn. It might too heavy, but it would definitely shake the show up and deal with real-life issues with the perfect show platform to do it in.

Songwise, this is one of the best weeks the show’s had in awhile (not a show tune in the lot). And you even get a completely original take on the Dolly Parton song “Jolene” sung by Jones.

Armed with some focused storytelling and some consistency, GLEE heads into sectionals next week on top. I’m glad the show has finally slowed down and started paying attention to its characters more carefully. It’s still far from perfect, but compared to the train wreck of Season 2, Season 3 is definitely headed in the right direction.