The executive producer talks about the two musical shows 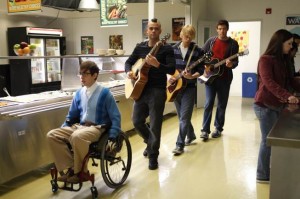 Dante Di Loreto is an executive producer on both Fox’s musical comedy/drama GLEE, returning for its third season on September 20, and its reality competition spinoff THE GLEE PROJECT, which has its season finale tonight on Oxygen. (He’s also one of the executive producers, along with GLEE/GLEE PROJECT colleagues Ryan Murphy and Brad Falchuk, on FX’s upcoming AN AMERICAN HORROR STORY.) The winner of THE GLEE PROJECT gets a role on the GLEE series.

Di Loreto talks with ASSIGNMENT X about both musical series’ – and time management.

ASSIGNMENT X: Everybody who works on GLEE talks about how brutal the schedule is. How are you managing to fulfill your regular GLEE duties and the GLEE PROJECT duties, and now AN AMERICAN HORROR STORY duties? Do you delegate a lot more than you did before, or …?

DANTE DI LORETO: It’s a challenge. The truth is, the more we do this show [GLEE], the more we learn things, we find efficiencies, we’ve built a really strong team that develops skills, so it continues to be a challenge, but I think we’re still able to do it. Mostly, we’re learning by experience.

AX: Are the rehearsals on THE GLEE PROJECT similar to what you do on GLEE?

AX: You all have input, but does Ryan Murphy have final say on who wins the GLEE PROJECT competition and goes on to be on GLEE?

DI LORETO: Ryan is the ultimate authority of everything GLEE.

AX: Your original GLEE cast had some members who were relatively new to professional show business, but this is even truer of the people on THE GLEE PROJECT. Since a lot of THE GLEE PROJECT participants are so new, is it harder letting them down when they don’t make the step forward to the next level?

DI LORETO: You know, I think anybody who has the gumption to put themselves up like this has to have the moral courage and strength to deal with the inevitable rejections that happen along the way. They happen to all of us, we’ve all experienced it, and hopefully, it only makes you better and stronger. 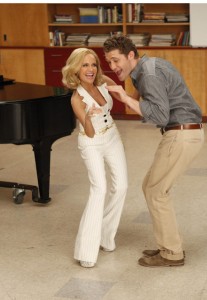 AX: At what point in the life of the original GLEE did you realize that it was more than just a case of people liking your show?  When did you notice, “This is a cultural phenomenon”?

DI LORETO: The first time, I was walking on some beach in a vacation place. It was somewhere on the East Coast, and you walked past somebody’s house, and you heard “Don’t Stop Believin’” playing. And then you heard another one of our songs playing, and then another one of our songs playing, and that kind of takes your breath away, because we produce the show in a very large, dark room, very much on our own. Really, even, it wasn’t until we got into Radio City Music Hall and we saw seven thousand people leaping to their feet when Chris Colfer came out on stage, we thought, “Oh, my God, we’re actually having an impact.” And it was really startling and exciting.  It still feels like we’re getting away with something – it still feels like it’s just us and our clubhouse of friends.

AX: THE SOPRANOS obviously had “Don’t Stop Believin’” as a big feature of its finale, and that became one of the big breakout songs for GLEE. Do you think the song’s use on THE SOPRANOS in any way affected the song’s use and/or its reception on GLEE.

DI LORETO: No. All the song selection comes from Ryan and it very much comes from deep inside of him. He’s got this catalogue of hits that resonates in his head and this encyclopedic knowledge of artists and dates and they come out, and it’s always driven by story. And it just seemed to be the right song. And it was a very different usage, because ours was very much about uplifting and hope and the future, and on THE SOPRANOS it had kind of an antithetical usage. I think it’s one of those songs that we all have a memory of from a certain part of our life. It resonates, it brings up memories and emotions of experiences at different times, so it just seemed to work. 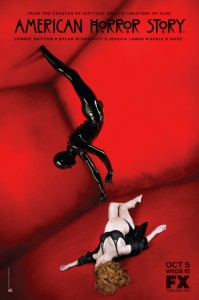 AX: Once it became clear that GLEE was quite a big deal, were you given more production resources by Fox?

DI LORETO: Some of our episodes got larger than were really sustainable, but it was done because we knew we were trying to grow the awareness of the show and we were figuring out what the show was. We’re now at a stage where we can produce the same emotional impact, hopefully, in a more manageable way. It has less to do with money and more to do with just how taxing it is physically for everybody. We wanted the show to be as much a joy for the crew as it is for the audience and to do that, we’ve got to stay on a course.

AX: So you’ve sort of learned the parameters of, this is how much time you’ve got and this is what can be done in that time?

AX: What have you learned on the job, besides those parameters?

DI LORETO: How to produce a TV series. I’ve worked in theatre, I’ve worked in long form – I’d never produced a full series before [GLEE] and this was a hell of a start-up. But I feel like I can handle almost anything at this point

AX: What are some of the bigger challenges that you’ve come across?

DI LORETO: Creating a deaf choir, creating three or four different musical numbers for the [first season] finale on a stage with five hundred extras. Every episode has a unique challenge, and it’s always exciting to open the script and see what the hell they’ve thought up next. We’re waiting for the underwater episode, because we know that’s got to be coming.

AX: Were you involved in the presentation at the White House?

DI LORETO: Yes. And all of those stagings had to be produced as well. From Oprah to the White House to Radio City Music Hall to Angel Stadium, every time you’re doing it, it’s unique.

AX: Did the White House have any specific requests, other than that you show up? Did anyone say, “Please sing this particular song”?

DI LORETO: No, they gave us a lot of freedom. The biggest challenge we had there was, all the electrics that we had preset the day before on the sound check had gotten unplugged and we had to start over from scratch. You can imagine, it was nerve-wracking.

AX: Did the Secret Service inspect everybody? 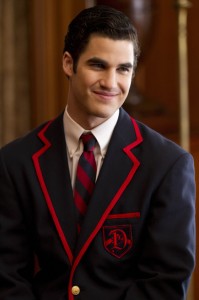 AX: How about the President and Mrs. Obama?

AX: Do you have any particular favorite GLEE episodes or favorite sequences in what we’ve seen so far?

DI LORETO: I like the large emotional moments, I like when you connect the emotion to the song to an audience’s expectations. I love surprising the audience, so it’s hard for me to say one moment, because I see clip reels of the show and I can’t believe half of it that we’ve done. I mean, in the pilot, we had so many different and interesting moments, you couldn’t believe it was all one episode of TV.

AX: What is the division of responsibility between you and the other GLEE executive producers?

DI LORETO: The others are writing and sometimes directing and I’m making sure that the wheels stay on the bus.

AX: Do you have anybody who helps you with keeping the wheels on?

DI LORETO: An extraordinary team of producer and production manager, Ken Silverstein, our production supervisor Karen Romero – we’ve got a terrific team. It’s a very lean and tight team and small compared to some other programs, but we’ve got such an amazing team, and our directors usually have a very, very good vision of what they want, that very little is left up to happenstance. So even if it’s the small details of a simple shot, or the conceit of a performance, we’ve got a very good sense of what we’re doing before we get there.

AX: And of all of the accolades and honors that GLEE has received, is there one that has meant more to you than the others, and are there any that you feel particularly proud of in your role as executive producer?

DI LORETO: I’m really proud to be a producer of the show, because I know how demanding it is, and it’s hard for me to say that there’s a particular award [that meant more than others]. They’re all incredibly flattering, but mostly it’s having people who you don’t know come up to you and tell you that the show has meant something to them emotionally. People who came up to me during the concert series and said how much certain characters meant to them in their lives, that was really, really moving. I mean, it sounds trite, but honestly, that’s powerful. And it will probably be years from now before I understand how important this is. Now you just work hard and do the job.