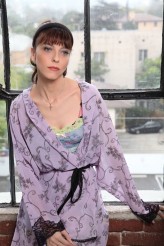 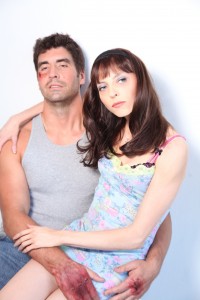 Anyone who has been part of an acting class in the last three decades has probably encountered at least sections of John Patrick Shanley’s play DANNY AND THE DEEP BLUE SEA. Its emotion-filled confrontations and small cast make it ideal for scene study. Originally produced off-Broadway in 1984, the two-character drama concerns Danny and Roberta, two lonely and troubled people who meet in a bar in the Bronx, hook up and spend the next twenty-four hours deciding if they’d rather get closer, run away, or beat the hell out of each other.

Actors Juliet Landau and Matthew J. Williamson and director John McNaughton (of HENRY: PORTRAIT OF A SERIAL KILLER feature film fame) have mounted a new production of DANNY AND THE DEEP BLUE SEA at North Hollywood’s Crown City Theatre. In this exclusive interview, Landau talks about how she became involved in the project and how she feels about playing Roberta.

ASSIGNMENT X: How did you meet/professionally join forces with DANNY AND THE DEEP BLUE SEA John McNaughton and your costar Matthew J. Williamson in the first place?

JULIET LANDAU: I produced a two-evening reading of A STREETCAR NAMED DESIRE. It is the centennial of [STREETCAR playwright] Tennessee William’s birth this year. We raised a lot of money for the charity Equality Now. I played Blanche, Matt played Stanley and John directed. It was a phenomenal experience. The response was spectacular. We were planning to continue to a full-blown production, but the rights were not available at this time.

AX: How did you decide on DANNY AND THE DEEP BLUE SEA as a project?

LANDAU: I have always loved John Patrick Shanley’s writing and there was a particular soft spot in my heart for DANNY AND THE DEEP BLUE SEA. I thought that John, Matt and I could do something special with the material. So I sent it to them and to the Crown Theatre. Everyone got excited and we took off running. John is a brilliant director. I was thrilled to work with him on it. I thought it would be magical, and it has been.

AX: What were the production considerations involved?

LANDAU: I liked that it was a small cast because we had a very limited rehearsal period. It was certainly easier to coordinate 4 schedules, including Kim our stage manager, than it would have with a larger cast. But really, it was the play itself. I felt ignited to be a part of telling this story. The material is extremely dark, but there is also a lot of humor in it.

AX: What was the time frame to get DANNY on its feet, from rehearsal through production?

LANDAU: We had three and a half weeks rehearsal. It is a two-hander. The stakes are incredibly high in the piece. Roberta and Danny are at their wits’ end. Shanley calls the play DANNY AND THE DEEP BLUE SEA: AN APACHE DANCE. The Apache dance came out of the Parisian street culture/street gangs in the beginning of the twentieth century. The dance was said to reenact a violent “discussion” between a pimp  and a prostitute. It was raw, violent, sexy, angry, sensual and tender. DANNY has this intense push and pull. It is a dance. We are yearning to connect but afraid to do so. It is a roller coaster of a ride.

AX: What drew you to the role of Roberta?

LANDAU: I love Roberta. She comes from extreme obstacles and abuse but holds this glimmer of hope that there is another way, a better way. She is a very complex character with many layers, as all human beings are. The play is set in the Bronx. It is street and colloquial but there is also a beautiful poetry to the language.

AX: The play was written in the early ‘80s. Do you feel it is a period piece at all or do you feel that all of its elements are still relevant today?

LANDAU: It could have been written now. It is about people and need. The themes apply and I think will always apply. It could be any era and could take place anywhere. The issues are universal.

AX: Do you feel that the play is making any general statements about life, or do you feel it is a portrait of these two specific individuals?

LANDAU: I think it is about life. A lot of people are dealt a terrible hand, but in this case, Roberta has a sense somewhere in her that she can change, that she can live in a different way.

AX: What do you need from Matt Williamson to allow you to play Roberta the way that you want to play her?

LANDAU: Whatever he brings, I am happy to work off of. That is one of the amazing things about acting, and especially stage acting. It is alive. It is wonderful when you find new things and when your partner does.

AX: What do you need to give him so that he can play Danny the way he envisions the character?

LANDAU: I think you would have to ask him. But I think I would say truth. If one comes from a place of truthfulness, honesty and depth in one’s work, anything can happen.

AX: Is it easier or more difficult to do a play opposite only one other actor, as opposed to an ensemble?

LANDAU: John says there is nowhere to hide in this play, which I really like. Matt describes it as acting in a phone booth in your underwear, literally and figuratively. It is a wonderful tennis match. Night after night we are discovering more.

AX: A lot of your fans know you from your work as Drusilla on BUFFY – do you see any parallels between the Roberta/Danny relationship and the Dru/Spike relationship?

LANDAU: The relationships are vastly different. Each is its own complete thing. But if I had to draw a parallel, both couples have a deep need for each other and an intense chemistry?

AX: The play is very physical in places. Did you work with a fight choreographer on those sequences?

LANDAU: We didn’t. Matt and I have both done a lot of theater. He has played a lot of Shakespearean roles and knows how to sword fight and do stage combat. We worked out those sequences slowly and by the numbers.

AX: How do you do the physical sequences night after night without severely injuring yourself?

LANDAU: I trust Matt completely. He is always in control of his physicality. For instance, when he [lays hands on] me, he always places his hands in exactly the same position. I was a dancer and he is athletic, so I think that is a benefit.

AX: Was there a lot of consideration about exactly how revealing your wardrobe would be in the bedroom scenes?

LANDAU: We wanted to do what was right for the play. We were immediately on the same page. I brought stuff in to work with as soon as we began tackling scenes two and three.

LANDAU: It has been extraordinary. We have been getting standing ovations. We got seven out of seven wonderful reviews, including the L.A. Times, so our houses have been full. We have been conducting Q and As on select Sundays, following the show. It has been so interesting talking about this play with the audience.

AX: What are you looking to do in your next stage production?

LANDAU: I’m not sure yet. I am still very absorbed in Roberta. We are running through December 18th, but it could possibly extend.

AX: Are you involved in any other projects at present?

I wrapped a film called DARK HEARTS, directed by a very talented director named Rudolf Buitendach. Goran Visnjic, Kyle Schmid, Lucas Till, Sonja Kinski and Rachel Blanchard are in it. I play a character named Astrid. She is very different than any role I have ever played. She is a beatnik-inspired artist and art gallery owner, who dresses like an art object herself, is always a little bit stoned and talks with a slight Cajun accent. I wore heavy white eyeliner and bangs, so she looks a bit mod. I also have a number of voiceover projects coming out, including JUSTICE LEAGUE DOOM, THE GREEN LANTERN television series, THUNDERCATS and STRANGE FRAME with Tim Curry. I just got back from two months in London. I have my work visa and signed with a U.K. agent. I met lots of amazing people, many of whom thought I was British because of Drusilla, so that was great. I have a lot of other projects cooking on the burner as well…

AX: Anything else you’d like to say about DANNY AND THE DEEP BLUE SEA?

LANDAU: The Crown City Theatre is at 11031 Camarillo Street in North Hollywood, near where Lankershim and Camarillo cross. We play Fridays and Saturdays at 8 PM, Sundays at 7 PM. The show runs about an hour and fifteen minutes. I am loving the experience, so I hope lots more people come to share in it?