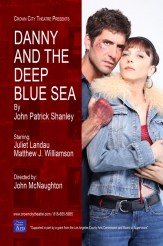 So every once in a while I get to review live theatre for this site. Since theatre is my background and the world that I come from, I love seeing it, and love supporting it even more. Especially when it’s GOOD live theatre.

DANNY AND THE DEEP BLUE SEA is a play that is written by John Patrick Shanley who is more noted for fun sweet films like MOONSTRUCK, and is directed by John McNaughton who directed films like MAD DOG AND GLORY; so put those two things together (even before you add an excellent cast) and you have the makings for an unusual story about relationships.

DANNY follows the collision of Danny and Roberta, two damaged people who find each other in a dive bar in the Bronx, and end up starting their sort of sickly funny version of a romantic relationship.

Juliet Landau of BUFFY THE VAMPIRE SLAYER and ANGEL plays Roberta and she is absolutely stunning to watch perform live on stage. Landau’s delicate features give her a fragile beauty that almost instantly pulls you into the contrasting roughness of her character’s demeanor and way she looks almost like a china doll. Her character is so achingly tortured about events in her past, that there are moments of emotional eruption which take the audience completely by surprise. Landau is moving in the quieter scenes and somewhat heartbreakingly manic in others. Her ability to transform rapidly between different complex emotional states is visceral and in your face and if you think you’ve seen her best work…you ain’t seen nothin’ yet.

Matthew J. Williamson of HELTER SKELTER also starred in a staged reading of A STREETCAR NAMED DESIRE with Landau, which was also directed by McNaughton, and he clearly has excellent chemistry with his so-star. Williamson’s Danny is someone you are equally attracted to and repelled by at the same time. His believable machismo and testosterone fueled aggression are raw and real, but then he also manages to convey the sort of damaged little kid at the core of his being. Williamson’s rugged good looks make it even harder to not like the character of Danny no matter what he is saying or doing on stage.  He’s the type of manly man that a lot of women (and yes some men) always dreamed about being with, but of course Williamson’s Danny is a damaged package that might never be repairable.

This is one of the most visceral evenings of theatre that I have had in a long time. The Crown City Theatre Company is an intimate theatre setting for this type of play, and the way it is directed and staged, it is impossible to feel completely comfortable emotionally. The audience is so close to the stage and to the action, that you feel as if you are a part of the emotional drama taking place in front of you, but then of course breathe a sigh of relief at the end that you weren’t.  In other simpler terms, the staging, blocking, and direction of the play is perfect. It traps the audience and forces them to face head on the emotions and stories being playing out just feet in front of them on the stage.

The scenic design and lighting are subtle and effective. This is a story about the two people on stage and their relationship to each other, and the sets and lights completely compliment what is transpiring. The set change is also effective and simple, and nothing about the designs detracts attention from the meat of the play. There have been times when a set design or lighting plot is so over the top that it takes me out of a show, but this is not one of those times. The costumes likewise serve to further the story and only supplement what is taking place on stage. The production design as a whole is well executed and designed.

DANNY AND THE DEEP BLUE SEA runs Fridays and Saturdays at 8pm, Sundays at 7pm at The Crown Theatre Company in North Hollywood, CA.  The running time of the show is and hour and fifteen.

Click on Link: Exclusive Interview with Juliet Landau on DANNY AND THE DEEP BLUE SEA