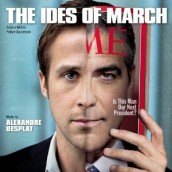 Alexandre Desplat hears the dark side of the American political dream

In the midst of a very busy year that’s included THE TREE OF LIFE, EXTREMELY LOUD AND INCREDIBLY CLOSE,  the finale of HARRY POTTER and the ironic opening and closing titles of CARNAGE, French-gone-gloriously Hollywood composer Alexandre Desplat found time to expose our nation’s king-making machine during the month of THE IDES OF MARCH.

Far more serious in tone than his previous, ironically offbeat political takedown for GHOST WRITER, Desplat lets his Americana flag fly here, and at low, concerned mast. A Copeland-esque orchestra reveals George Clooney’s potential president as yet another moralist full of hot air, with a trumpet showing Ryan Gosling’s consultant that there’s a high human cost to his electoral game playing. Once again, Desplat’s penchant for sub-sonic tones creates suspense, along with a bright, near militaristic march theme for a flag-waving political machine on the march.

By the end, Desplat’s often-tender music shows both ends of the political coin as being part of the same hypocrisy, one where dark deeds must ultimately be done for a seemingly just cause. It’s a compelling score that tells us there’s something very rotten in Denmark, let alone our musical heartland.