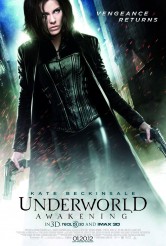 UNDERWORLD, much like the RESIDENT EVIL franchise (also distributed by Screen Gems),  seems to have a standard formula providing just enough gore, monsters,skin and women in tight leather to warrant an endless amount of sequels that’s high on action and low on plot.

And yes, this formula seems to work and the boxoffice continues to support these films with UNDERWORLD: AWAKENING being no different.

The fourth installment of the franchise brings Kate Beckinsale’s Selene back after her absence in the prequel interlude  UNDERWORLD: RISE OF THE LYCANS. Consider this a reboot too.

With the werewolf/vampire battles taking a backseat as AWAKENING opens, the whole world is aware of these two monster factions living in society and a great purge has taken place as the humans start annihilating this new enemy.

During this purge, Selene is captured and put on ice for 12 years. She’s part of an secret experiment which has resulted in scientists creating her spawn with Eve (India Eisley). Eve’s more powerful than a werewolf and vampire combined (or so we’re told) and soon both have broken out of the lab that harvested Eve and kept Selene incapacitated as the world changed around her.

Of course the lab has other secrets and even though the world thought they eradicated vampires and werewolves – they have been secretly living underground and preparing for their … big music cue … AWAKENING!

Yes, the plot is pretty thin, despite original writer-director Len Wiseman scripting and producing, with a polish by sci-fi legend J. Michael Straczynski. Where AWAKENING really comes to life though is the non-stop action sequences which are absolutely stunning.

The movie starts off action-packed and for a brisk ninety minutes, it doesn’t let up. Directors Mans Marlind and Bjorn Stein have a flair for the over-the-top, but whereas many modern action directors tend to make sequences so chaotic they end up becoming non-sensical cartoonish videogames, here, the sequences have an artfulness to them – except there are vampires and four-legged werewolves thrown into the mix.

Granted, the CGI werewolves are some of the worst yet in the franchise, the practical werewolf effects (by MastersFX) are quite good.

Another plus is Beckinsale, who still rocks it in her leather outfit and brings a little motherly swagger to the story which is thematically about parenthood, but doesn’t dig deeper than a few obvious lines of dialogue and the fact that there’s a bunch of dudes with daddy issues running around all over the place.

UNDERWORLD: AWAKENING utilizes its 3D quite well, though, as always, it’s an addition that seems superfluous more than a necessity – though watching it in IMAX is the real bonus. The stylish vistas and crazy action pops from the large screen format and really absorbs you right into the action. I’ll take IMAX over 3D any day, and having them both definitely enhances the overall experience.

For horror fans, this is far from a perfect film. It’s more action, than horror, yet after several years of suffering through the brooding, almost non-existent horror attributes of the TWILIGHT franchise, it’s nice to see a vampire film that hasn’t had the life sucked out of it and is willing to go balls to the wall with its action and gore. I can’t wait to see what the franchise awakens next.

Click on Link: Exclusive Photos from the UNDERWORLD: AWAKENING premiere