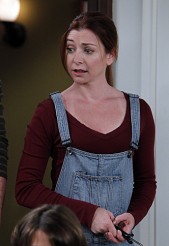 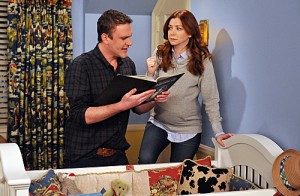 Relatively few actresses create three indelible characters in their careers, but Alyson Hannigan has managed this hat trick and may well enact more in her future. Hannigan, born in Washington, D.C.and raised in Atlanta, started her career early, appearing in commercials before moving into films (including MY STEPMOTHER IS AN ALIEN) and television (FREE SPIRIT).

Then, in 1997, Hannigan began her seven-season run as BUFFY THE VAMPIRE SLAYER’s Willow Rosenberg, who started as a shy brainy high school student and became a very powerful witch, along with achieving real-world lesbian icon status when the character came out.

Willow lives on to this day in comic books and as a series of action figures. AMERICAN REUNION, Hannigan’s fourth turn as sexually enthusiastic band geek-turned married lady Michelle Flaherty of the AMERICAN PIE films, is due out later this year. Her catchphrase “This one time at band camp …” still reliably gets laughs.

And Hannigan is now in her seventh season starring as the assertive, adorable Lily Aldrin in CBS’s hit half-hour comedy HOW I MET YOUR MOTHER, airing Mondays at 8 PM. Lily is one of a group of five close friends who include Lily’s husband Marshall (THE MUPPETS co-screenwriter Jason Segel), Robin (Cobie Smulders), Barney (Neil Patrick Harris) and Ted (Josh Radnor), living in New York City as Ted tries to find the woman who will become the mother of the title. 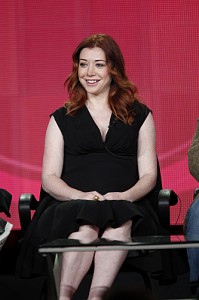 On a panel to discuss women in comedy and in two subsequent informal conversations, Hannigan discusses the various elements of her very successful career.

ASSIGNMENT X: Willow on BUFFY was your first big adult role, and that lasted seven years. She was often in relationships, but she wasn’t defined by them. After that, were you holding out for roles where you weren’t relegated to being “the girlfriend”?  Even in AMERICAN PIE, Michelle is a pretty assertive character.

ALYSON HANNIGAN: Yeah. I mean, I don’t think it was ever really in my head of, “Oh, I can’t …” Because Lily [on HIMYM] was the girlfriend – they got engaged in the pilot – but she had a voice and she had a personality, and that’s what I look for.

AX: With Lily, there isn’t a sense on the show that she’s any more a girlfriend than Marshall is a boyfriend. She’s one of the five people whose lives we’re looking at.

HANNIGAN: Definitely. And that’s what appealed to me. But I don’t go in and go, “Oh, she’s a girlfriend.” I would not respond a part that is just a superficial sort of being there and not having anything to do. That bores me, and why use me if they’re going to do that? Get a model [laughs]. 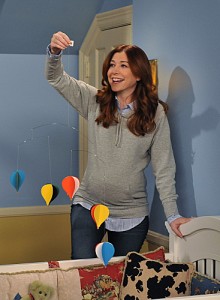 AX: Are there any actresses who have been inspirations for you in terms of doing comedy?

HANNIGAN: Carol Burnett was a big inspiration for me. I would sneak out of my room and watch [THE CAROL BURNETT SHOW] through a cracked door because it was past my bedtime, but I loved it.

AX: Were there any real-life motivations for doing comedy?

HANNIGAN: When I was growing up, I knew that if I could make my mom laugh, I wouldn’t get in trouble. It was like she was either going to yell or laugh. So I tried everything.

AX: Last season, you and Jason Segel had a very dramatic scene where Lily tells Marshall that his father had died. Word is that you were only told about the scene the morning of filming, and that it was done in only one take …?

HANNIGAN: Well, we knew it was going to happen, but it was very secretive, and then Jason didn’t read my line and I told him what the last word was, and he wanted to hear it for the first time when I said it. And we only did one take. I was like, “Jason, are you sure? I’m going to take some pauses, and the last word is ‘it.’” And I don’t say “it” any other time. But it was so wonderful. And we only did it once. I was, “Are you sure? We should probably do it again.” But they were like [happy with it].

AX: Did you feel like that was a departure for the show, or part of the balance of the HIMYM tone?

HANNIGAN: [The episode with] the memorial service was a blast. Really fun. We were all like, “How do you do the funeral and still make it funny?” And they did. The great part of our show is that you can have real moments and still find the funny in them, make you laugh and cry all in the same episode. So we’re really lucky to do that for a half-an-hour show. It’s pretty rare for multi-camera.

AX: How is working on a multi-camera series?

HANNIGAN: It’s definitely a different animal. We don’t do it in front of an audience, which I think helps us and hurts us, because we don’t know if it’s funny or not [because there’s no audience reaction]. There are a lot of times when you’re like, “Gosh, if it was single-camera, this would be so much better,” because you could do so much less [in terms of the size of the performance], but I don’t know. It works. I’m always surprised how big you can go, and it still isn’t that big on our show, because the cameras are so far away and it’s always wide, but then in scenes [like the one] where I’m telling Marshall his dad died, I would have liked a single camera because it could be like this [indicates stillness] and you could see that I was crying, but it still worked, I hope. 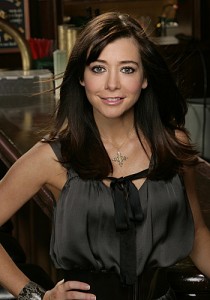 AX: A few years ago, a lot of people were bemoaning the demise of the half-hour comedy. Why do you think that HIMYM and some other comedies have become such hits?

HANNIGAN: When we started our show, every interview was like, “You know, comedy is dead, so good luck.” The sitcom was dead. I definitely think that with everybody struggling, you just want to escape, and – I don’t know. I just don’t want to sit down and watch another serious, depressing procedural about people getting killed. It’s like watching the news. So I’m happy to have such wonderful shows to be able to entertain [audiences with] and be entertained by.

HANNIGAN: Oh, I definitely [hoped] that they have a baby. Absolutely. Marshall and dirty diapers is going to be fun.

AX: Any concerns about working with a real baby once Lily delivers?

HANNIGAN: Yeah. Working with a baby is hard, but it’s shorter hours [laughs].

AX: When are you expecting your second real-life child?

HANNIGAN: In the summer.

AX: How are you holding up?

HANNIGAN: We just got back from our vacation. I’m taking multi-vitamins, but I’ve got a two-and-three-quarter-year-old, so sleep isn’t the most prevalent thing in our household. It’s actually different, because with my first [pregnancy], I had such strong cravings and it was like, “I know what I want to eat and I want it right this second.” And this one is like, “Well, whatever, that’s fine.” So I feel like this baby is just [thinking to him or herself], “Well, whatever …” 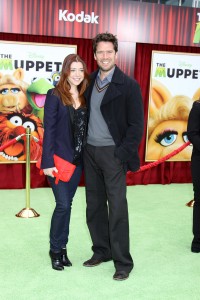 AX: In reality, you’re due in the summer, but May sweeps is when television characters usually have babies. Will you give birth on the show before you do in real life?

HANNIGAN: Lily is farther along than I am.

AX: Having worked on HIMYM during your previous pregnancy, did you learn anything from that experience that’s helping with this experience?

HANNIGAN: Well, the last time, I had to hide it, so I learned how to hide behind things a lot. This time, I don’t have to [because the character is also pregnant], so that’s really nice. I mean, I still have to wear a pregnancy pad, because she’s farther along than I am, but I’m glad that I’ve already been pregnant and had a kid, so now I know, it’s going to he harder to get in and out of the booth, and had I never had a kid, I’d be like, “Oh, I can get in and out of the booth. This pregnancy pad isn’t bothering me at all!”

AX: How was it getting back together with the cast of AMERICAN PIE for AMERICAN REUNION?

HANNIGAN: Such a blast. It was so much fun. It really was like a reunion, and the movie is so good.

AX: What is your character Michelle like in the new film?

HANNIGAN: Well, she has a kid, and [she and Jason Biggs’ character Jim] are trying to balance being parents and also being in a relationship and not letting that take the back burner.

AX: Is there any line in this one as memorable as the “band camp” line?

HANNIGAN: I hope so. I saw it a few weeks ago and I think it’s just as funny, if not funnier, than the first film. I really, really am so excited about it. It turned out so well and fans of the first one, or any of them, are going to be really be happy.

AX: Your husband Alexis Denisof stars as Benedick in Joss Whedon’s film version of MUCH ADO ABOUT NOTHING …

HANNIGAN: He is really the Shakespearean of the family, and it worked out really well, because we don’t have a nanny, so it was really good that while he was working, I could be at home with [Hannigan and Denisof’s daughter]. I was so happy that he had that experience, and it was such a joy for him. It was done guerilla-style at Joss’ house and it was really fun and I can’t wait to see it.