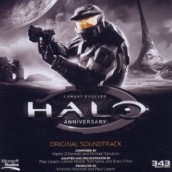 The Spartans get their musical armor re-play-ted

It’s been ten years since The Master Chief took on The Covenant to essentially create the modern video game industry. And through numerous sequels, spin-offs and rip-offs, the legend of the HALO name brand has been the one ringworld to rule them all. But just as importantly, HALO helped show the non-gaming industry that music for the medium could rival the musical quality, and production values heard on television and film.

Credit for that can be given to HALO composers Martin O’Donnell and Michael Salvatori, the distinct voices that have been heard through all the main HALO games. While it might have been hard to imagine a neo-religious, monk-like chorus accompanying an alien-blasting Spartan warrior, the duo’s notable theme, symphonic sound and ethnic percussion opened up a whole new musical world to video role playing, especially with battle music two steps removed from an Irish jig. Mixing heroic fanfares with eerie synth atmospheres, and rock and roll firepower with ethereal beauty, HALO‘s music was an experience as enveloping as the compelling graphics and storytelling that have stood for this trendsetting franchise.

Though the gameplay and graphics have been ever evolving, O’Donnell and Salvatori’s original music stands the test of time, especially with their black, gold, green and red armor spiffed up for this two-CD tribute edition by Paul Lipson, Lennie Moore, Tom Salta and Brian Trifon- a team whose love of all music “Halo” shines here with the new musical tech they’ve given to this golden oldie. It’s an evolved soundtrack whose pulsating, spiritual power has remained undiminished in opening up a new level for of musical possibilities way beyond the Xbox.