CD Review: I MELT WITH YOU soundtrack 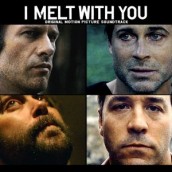 ©2011 Lakeshore Records
I MELT WITH YOU soundtrack
Reviews

CD Review: I MELT WITH YOU soundtrack

It's a cool-bad trip of alt. rock classics for a reunion gone wrong

Forty-something guys behaving badly get a beguiling collection of ‘8o’s era American punk, new wave and English beat songs for an album that plays like a Goth hell version of ST. ELMO’S FIRE. You can practically see the black eye shadow dripping from the emo singers whose music made for the characters’ best years, songs whose guitar-driven angst thankfully took pop b.s. into the rabbit hole for the birth of alt. music a couple of decades ago.

Perhaps no depressed spin on the characters’ long-vanished youth speaks to the f’d up wasteoids they’ve become like Modern English’s I MELT WITH YOU, where the band takes their bouncy anthem of 1980’s affirmation (best experienced as the theme song of VALLEY GIRL) and turn it into a slow, gnarled guitar drug trip that’s a nightmare of better lives long gone by.

Clink on the link to buy:More ASSIGNMENT X soundtrack reviews

Article Source: Assignment X
Article: Review of I MELT WITH YOU soundtrack

Blu-ray and DVD picks of the week including ABDUCTION
Exclusive Interview: Selma Blair deals with ANGER MANAGEMENT
Movie Review: KILL YOUR DARLINGS
Jaheem Toombs on 100 THINGS TO DO BEFORE HIGH SCHOOL - exclusive inter...

Tags: I Melt With You, Modern English, Movie Soundtracks, soundtrack