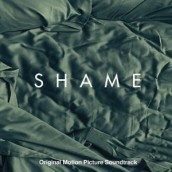 SHAME director Steve McQueen (soon never to be confused with the actor) takes us on the musically eclectic predilections of a sex addict’s listening tastes, both from Brandon’s utterly confident position as a vinyl-obsessed pick-up artist to expressing the unrelenting carnal drive whose reasons are never expressed in the film.

A bit more of a glossy cousin to the sensual, s & m likes of 9 1/2 WEEKS than SHAME would like to admit, McQueen’s choice cuts lend class to the unseemly, ranging from Glen Gould’s vocalized Bach playing to the seductive retro beats of Blondie’s “Rapture” and Chic’s “I Want Your Love.”

Howlin Wolf provides R&B bump-and-grind when things truly get nasty towards the climax with “You Can’t Be Beat,” with the techno beat of Mark Louque’s “The Problem” realizing a sex club as an entrancing circle of hell. While composer Harry Escott’s long-building “Brandon” is more than reminiscent of a similar simmer from THE THIN RED LINE, the spare, haunted pianos of his “End Credits” tie in nicely to the album’s many Gould pieces, painting Brandon as an elegant, sympathetic miscreant in need of some help. But perhaps the element of SHAME‘s collection that really pushes the limit is how it goes over the 79-minute mark, a demarcation point I thought a compilation couldn’t handle. Even if McQueen might not intend it, SHAME is suave listening for a seducer’s bachelor pad, one that’s likely to score.