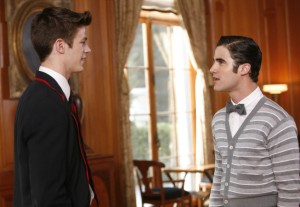 Up and down – that’s what GLEE is all about these days and this is the “up” week dubbed “The First Time.”

The reason it’s up – some fine direction and solid writing elevates the show, even with a few missteps along the way.

The episode’s theme is, no surprise, “The First Time” and it deals with the school play WEST SIDE STORY finally being put on as well as Rachel (Lea Michele) and Blaine (Darren Criss) realizing that they need to stop being virgins and have sex with their other halves.

Of course things don’t go quite as planned. Rachel seduces Finn (Cory Monteith), who rebuffs her when she admits she wants to have sex because it will help her acting career in the school play Meanwhile, Blaine takes a liking to a new Warbler Sebastian (Grant Gustin), but doesn’t reciprocate his feelings. This makes Blaine want Kurt (Chris Colfer) even more. Yet, when he wants to make love with Kurt after getting drunk and going to a gay bar (don’t ask), Kurt gets mad.

Even though these two subplots are a bit hokey (though well-written), it’s Coach Beiste (Dot Marie Jones) that gets the best scenes. She’s enamored with a football recruiter named Scooter. She’s liked him for a long time, but doesn’t think that he likes her. That couldn’t be further from the truth – and it takes a little nudging from Artie (Kevin McHale) for Scooter to finally be obvious about his intentions.

When Coach is unsure whether Scooter is sincere or not, it results in some of the best dialogue for any character on GLEE all season. Thank goodness Coach is getting some great screen time and some emotionally well-meaning moments.

Finally, Mike Chang (Harry Shum Jr.) has a confrontation with his dad (Keong Sim) who is mad that he’s still in the school play. The conversation ends with his father disowning him if he doesn’t quit (but he won’t quit). There are some DEAD POET’S SOCIETY echoes here, let’s hope the end result doesn’t lead to tragedy.

Finally, we get a visit from Kurt’s tormentor last season (and closeted homosexual) Dave Karofsky (Max Adler) who is a regular at the gay bar they sneak into. Dave moved to a different school so he wouldn’t have to deal with rumors about his sexuality. He also comes to terms that he’s a bear. It’s interesting to see Karofksy in a different light this year – though it’s a shame the character was written off the show after all the great character nuances he received last year.

One of the best parts of “The First Time” is the direction by Bradley Buecker and how he integrates the songs from WEST SIDE STORY with major moments happening on screen.

When Sebastian starts making moves on Blaine, it’s cross-cut with rehearsals of Rachel singing “A Boy Like That.” “One Hand, One Heart” gets similar treatment. It works incredibly well and Buecker handles it with flair and finesse.

The best song though has to go to the Warblers rendition of the Billy Joel hit “Uptown GirL”  This episode is yet another reminder of how much the Warblers, with Blaine fronting them, is missed.

One person who is not missed is Sue (Jane Lynch). Whenever the character is M.I.A., the show tends to flow much better. A little of Sue goes a long way.

“The First Time” is definitely better than “Pot O’Gold” and it’s nice to see the through-line of WEST SIDE STORY get played out over the course of multiple episodes. The show feels like it’s trying desperately to get back on track.

It may still need some more time to do that, but episodes like “Asian F” and “The First Time” are certainly steps in the right direction.