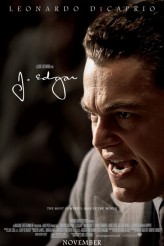 A well-made, ambitious but very uneven biographical drama about the founder of the FBI

Trying to cram the story J. Edgar Hoover (Leon ardo DiCaprio), the origins and permutations of the FBI, the effect of federal law enforcement on civil rights and vice-versa, Hoover’s relationship with his mother (Judi Dench), longtime secretary Helen Gandy (Naomi Watts), perpetual right-hand man and best friend Clyde Tolson (Armie Hammer), Hoover’s monumental ego, penchant for exaggeration, paranoia, possible sexual hang-ups and more into a running time of approximately two hours and sixteen minutes is a tall order. This is what director Clint Eastwood and writer Dustin Lance Black do with J. EDGAR. On the surface, these seem like the best people for the job – after all, Eastwood makes beautiful films and Black scripted MILK, which dealt not only with its title historical figure but with his life and times.

However, MILK was easy by comparison. Harvey Milk was assassinated in early middle age and, while he paved the way for a lot of great civil rights progress, he didn’t do something like, say, change the face of government law enforcement. Furthermore, Milk was an open and easy to like man. With J. Edgar Hoover, the filmmakers have a number of separate though intertwined factors. There is the story of how the Federal Bureau of Investigation grew out of the Justice Department. There is the story of investigative techniques we now take for granted, like fingerprinting, at first having to be forced onto skeptical investigators. Then there is the story of Hoover, whose ego and professional aspirations were enormous and whose private life is still the subject of great speculation. It is known that for the better part of five decades, he saw Tolson virtually every day. A miniseries might have had world enough and time to give all of these elements their due, but trying to service them within a regular-length feature film results in something that feels choppy and disconnected.

J. EDGAR employs the narrative technique of having the older Hoover dictating his memoirs to a variety of young agents, then flashing back to various events, while also including Hoover’s private periods in his last days. This isn’t confusing in terms of knowing when things are happening – the splendid production design by James J. Murakami and degrees of desaturation in Tom Stern’s cinematography address this handily – but it does wreak havoc with any sense of cause and effect. We see Hoover trying to grab credit for whatever he can, but we’re never shown why this works. We see manifestations of his prejudices and paranoia, but don’t get a handle on whether this is causing Hoover to be the closed-off person that he is, or whether his idiosyncratic self-isolation is dictating public policy. We also don’t get a sense of whether the filmmakers think Hoover could have accomplished his goals without all of this venom, or whether it was necessary to achieving his ends, or whether the ends were worth the means. In attempting to be even-handed, the filmmakers give us a bunch of incidents that don’t appear meant to lead into one another.

Then there is the relationship between Hoover and Tolson, which is presented as not so much a case of love unrequited as love unconsummated. Here again J. EDGAR feels fragmented. This isn’t due to the nature of the relationship – even now, let alone when Hoover was a young man, plenty of people have enormous trouble dealing with their own sexuality – but rather to its depiction. Hammer exudes enormous warmth as Tolson and he’s easy on the eyes, as the saying goes. It’s not hard to understand why Hoover feels something for him at first sight. Given that we know Tolson has no law enforcement ambitions and given that Hoover is short on both charm and looks, and finally, given that we don’t sense an immediate affinity between the two, we don’t see what in the initial interactions triggers Tolson’s instant devotion, or what keeps him around while Hoover engages in a lot of what Tolson, along with the audience, sees as questionable professional conduct.

We actually are given a much better sense of the bond connecting Hoover and his lifelong, utterly trusted secretary Helen Gandy (Naomi Watts in a very sure handed performance). There’s a fairly wonderful scene in which Hoover attempts to woo Gandy in a very unorthodox manner, the two take each other’s measure and we get a durable sense of what the two characters see in one another.

This clarity and inventiveness is less present throughout the rest of the film. Even when we learn something novel and intriguing about forensic techniques, the movie doesn’t have enough real estate to give us a clear sense of when or how or if they changed Hoover’s political stock. We know fingerprinting has become crucial to police detective work, but when did this happen? Did it help Hoover, or was it accepted during the midst of so many other events that he couldn’t savor the triumph?

DiCaprio does some of his best work here when Hoover is alone, trying to grapple with emotions he does not understand. The actor conveys wordless, uncomprehending heartbreak so affectingly that he succeeds in humanizing Hoover somewhat.

Working against that humanization process is the stylized nature of the presentation of J. EDGAR’s early sequences. Granted, we are seeing this through Hoover’s self-mythologizing eyes, but the combination of the bigger-than-life delivery, ‘40s-esque dialogue and the extremity of what’s being said brings the scenes to the verge of parody. It appears that we’re meant to see that this is Hoover’s romanticized notion of his past, but it’s too arch to work as drama, while not intended as comedy.

In some ways, J. EDGAR is reminiscent of 2002’s FAR FROM HOME, another stylized period piece with troubled characters whose public faces did not match their private actions. In fits and starts, J. EDGAR is moving and informative, but more often, it seems trapped between wanting to illuminate and wanting to be discreet.  It is something of an achievement that Eastwood, Black, DiCaprio and company can make us feel a measure of (mostly) pity rather than outright hatred for Hoover as we’re watching him be stunned when his attempt to blackmail Dr. Martin Luther King meets with failure. Still, what we’re left with is a film that humanizes its subject so much and no more. The result feels paradoxically like too much and not enough in its marriage of fact, speculation, emotion and restraint.