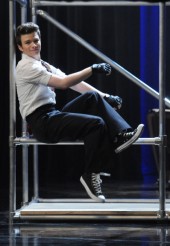 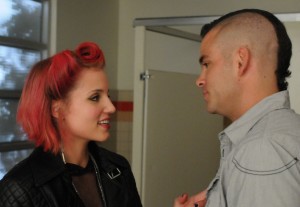 Watching GLEE during Season 2 made you feel like you were on a heavy-dose of anti-depressants. One week, you’re feeling lousy about what the show just did, the next week you’re surprised it pulled itself out of the muck and delivered a good episode.

That trend seems to already be in place with Season 3. After an atrociously bad season 3 premiere – “The Purple Piano Project” – the show bounces back nicely with “I Am Unicorn.”

Granted, there are still some grating issues with this episode too, but as a whole, it’s actually quite good, streamlining storylines, creating drama, pushing stories forward and generally trying to get the show back on solid footing.

It’s ironic that when Kurt (Chris Colfer) is the focus of an episode, the series seems to be more grounded and real that usual, and that’s the case here as Kurt decides he wants to run for Student President. Brittany (Heather Morris) decides to help him – but her idea of a campaign involves unicorns and pink. Kurt wants his campaign to be less “gay” and more mainstream. This theme extends to auditions for the school play of WEST SIDE STORY. He gives an awesome audition, but the directors of the play – Artie (Kevin McHale), Coach Beastie (Dot-Marie Jones) and Emma (Jayma Mays) – feel he’s not tough enough to play the lead.

This sends Kurt through a major identity crisis. He wants the romantic lead. He wants to play tough. He doesn’t want to be pigeonholed. However, his dad (Mike O’Malley) gives him a solid speech that he needs to create his own rules and own parts, instead of trying to reach for things which he could never be.

Meanwhile, we finally get to see where this whole downward spiral Quinn (Dianna Agron) has been on is going. As leader of the Skanks she’s changed her hair color, her voice, her attitude and smokes. She’s unhappy, but we now realize it has something to do with giving up her daughter for adaption. It doesn’t help that Shelby Corcoran (Idina Menzel) has returned to teach at the school (and start a competing Glee club, more on that later).

Shelby is the one who adopted Beth – the young daughter of Quinn and Puck (Mark Salling). Puck wants to be part of the child’s life and so does Quinn, but Quinn needs to get her act together. There are some really solid scenes. On one side with Sue (Jane Lynch) and the other with Mr. Schuester (Matthew Morrison) who lets Quinn have it (one of the best scenes Mr. Schuester’s had in quite awhile).

Of course, Quinn, still being self-centered Quinn, decides by episode’s end that she’s going to get her baby back. Oh great – this isn’t going to end well.

Shelby also stirs up more heartache with Rachel (Lea Michele), since she’s her birth mother. There’s some repeat of scenes we’ve seen before between Rachel and Shelby (a little boring if you ask me), but we’ll see where all this is heading.

The big annoying aspect of this episode is the notion that the school has agreed to allow two Glee clubs at McKinley with Shelby running the competing group. Couldn’t Shelby return without having this ridiculous storyline part of it? If they carry this story over multiple episodes, maybe it could be interesting, but the way GLEE chews through stories (the one’s of convenience, that is), I doubt it will last very long.

While the show is a vast improvement over the premiere, there does seem to be a feeling of “more of the same.” There’s just so much repetition going on, that the show feels like it’s treading water at times.

And again, the idea of “inspiring” seems be getting lost once again. Even though I’m glad Quinn is getting an actual arc, it still feels weird and forced. She’s now become the most unlikable and ugliest (personality-wise) character on a series that has a lot of ugly nowadays.

Of the bright spots, I say give more to Jones’ Coach Beiste. I’m loving this character and she continues to be one of the most interesting and entertaining characters on the show. Kurt’s dad is also another warm welcome whenever he gets a few minutes on the show. One of the better written parents ever on the history of teen shows.

I’m also disappointed in how one-note Blaine (Darren Criss) has become since he left the Warblers. He was one of last year’s break-out characters, and now he feels out-of-place at McKinley and it feels like the writers don’t know what to do with him. And with the episode trying to create some friction between him and Kurt (regarding the lead in the play), it can’t end well either.

The song selection felt more organic to the story (used under the guise of auditioning for the school play), though, being show tunes, I found them a snooze-fest).

So overall, a much better story. Not perfect, but much more tolerable than last week. There’s a full season ahead, but the storytelling seems more focused and with the heavy work that’s been done on the characters to guide them into longer story arcs, this could be the start of something rather good. Then again, the show might forget to take its meds and go off the rails once again next week. Stay tuned.