Home » DANCING WITH THE STARS Season 13 Recap: Quasi-Shocker as Canalis ousted on Week 2 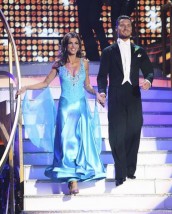 DANCING WITH THE STARS Season 13 Recap: Quasi-Shocker as Canalis ousted on Week 2

The DWTS popularity contest kicks into high gear once again

Once again popularity prevails on DANCING WITH THE STARS when Elisabetta Canalis became the second celeb ousted from the season 13 show. With evidently a small fan base, Canalis and partner Val Chmerkovskiy, although not the lowest scorers of the night – in fact they tied for third with three other couples – were just not as popular as David Arquette, Carson Kressley, Hope Solo and believe it or not Chaz Bono, who actually had the lowest scores of the night. Sadly, Canalis’ real shot to fame was only in her personal life when she dated super star George Clooney for two years.

Before Canalis’ exit, Kressley was first to be relieved as he was told he and partner Anna Trebunskaya were safe. Then Arquette was told he and Kym Johnson were in jeopardy, which is never a good sign. On to the encore for Ricki Lake and Derek Hough, no surprise there, they were the top scorers of the night.

A video segment about DWTS’ Cribs was humorous as the cast showed us where they practice and pretty much hang while rehearsing all week long. Script performed with season 13 non-competing pros Chelsie Hightower and Dmitry Chaplin dancing in front of them. Then, boom, 2nd safe was Lake and Hough, 3rd safe was Kristin Cavallari and Mark Ballas, and 4th safe was J.R. Martinez and Karina Smirnoff.

Cut to the stars on video talking about the elimination process and then onto the traditional Macy’s Stars of Dance performance which, although it’s always a commendable experience, it’s not really the reason we watch the results show. Just an aside if you will.

Boom, back in to the game…. 5th safe was Rob Kardashian and Cheryl Burke and then 6th was Nancy Grace and Triston Macmanus. How did she make it through? Huh? Anyway, Demi Lovato gave her best in her continuing come back tour while dancers jumped around on what appeared to be some sort of jungle gym for adults. Moving right along…7th safe was Chynna Phillips and Tony Dovolani and then 8th was Hope Solo and Maksim Chmerkovskiy.

Then there were three…Canalis, Arquette and Bono, with their respective partners. As Bono was told he was safe, the crowd erupted. Finally, it was time to announce, Elisabetta and Val were gone. Maybe he shouldn’t have acted like such a jerk in the video promo they showed before they danced last night. Who knows, maybe that had something do with it. At any rate, they’re off the show.