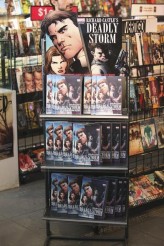 A super hero killer? Are you kidding me? 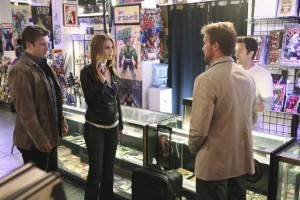 This is your classic CASTLE episode – a little flirting between Castle (Nathan Fillion) and Becket (Stana Katic), a family issue with Castle’s daughter Alexis (Molly Quinn), and his mom Martha (Susan Sullivan) doing something weird that oddly complements the case that Castle and Beckett are working.

Fair warning – the opening scenes are pretty gross. The victim – a complete no-goodnik name Tyler Faris (James Ferris) – gets his hand cut off, and then his entire body is sliced in two with a sword. The problem is that the killer is wearing a super-hero costume. Okay, it’s not quite the bunny suit we requested, but the thought is similar.

So naturally, the wrong suspects are trundled into the interrogation room, one right after another and while we didn’t entirely guess the ultimate bad guy, we did catch one of the twists.

The rough part is that things do seem to be somewhat warmer between Castle and Beckett – there’s that friendship thing happening, which is always nice – but to write about more would give something else away and this is a spoiler-free zone. Let’s just say that they bond over more than comic books.

Also, Alexis actually admits that her dad is right about something, even as she drops the bomb that she’ll be leaving for Stanford a full six-months early. Not something Castle wants to deal with, and who can blame him? As for Martha, she’s working on costumes for her Shakespeare classes. Hmmmm.

All in all, it’s the kind of episode that is classic, but not pedestrian and part of what makes this show so addictive in the first place.