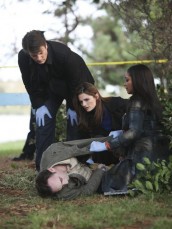 All the details on why ABC wanted the show, how Nathan Fillion got cast and support from the Browncoats

For those that haven’t caught up with the pleasures of ABC’s Monday night crime drama CASTLE, you’re missing out on one of the freshest procedurals currently on network TV.

Nathan Fillion stars as best-selling mystery writer Richard Castle on the series, who met NYPD homicide detective Kate Beckett (Stana Katic) when he was wrongly suspected of committing murders based on his books.

By the time that was cleared up, Castle decided Beckett would make a great basis for his next fictional series and has been tagging along with her to crime scenes ever since. The friction between his fictional musings and her factual experience, their mutual attraction and Castle’s home life with his showbiz mom (Susan Sullivan) and bright daughter (Molly Quinn) have caught on big-time with audiences.

ASSIGNMENT X caught up with executive producer Laurie Zaks to talk about how CASTLE came into being, what’s distinctive about the show – and about the boost it gets from Nathan Fillion’s FIREFLY fans in this exclusive interview.

ASSIGNMENT X: How did you and Andrew Marlowe team up to make CASTLE?

LAURIE ZAKS: I was heading Beacon Films Television at the time and Andrew had done two films for Beacon, AIR FORCE ONE and END OF DAYS. He came in and I met with him and we really wanted to work together. He had five or six different ideas, and we went up to the network and pitched all of them and said, “Which one sounds like it can be the show?” The initial sentence [pitch for CASTLE] was, “A very successful novelist who teams up with the NYPD through a series of circumstances.” And that was it. [The project] was one of those that got lost in the strike and then we had to start again.

AX: Was the role of Rick Castle originally conceived as a role for Nathan Fillion, or was he brought in after the project was developed?

ZAKS: He was high on the list [of possible actors]. He read it, and he loved it and he just said, “I want to meet these people.” We really hadn’t spoken to anybody else and as soon as we met him, we knew he was Castle. I can’t imagine anybody else doing it. He totally embodied it.

AX: Were you aware when you hired him that he came with an uncommonly loyal fan base?

ZAKS: Absolutely. A hundred percent. [laughs] This’ll bring my demo down [in age, which the networks consider a good thing]. His fans love him and we love his fans and we thought even if they’re not a traditional ABC audience that they would also come to the show – and they do. On the Internet, on the websites, on the blogs. It’s a very avid audience. [There are] soap fans, but it’s the SERENITY fans – the Browncoats – when he’s going to do a show, like when he’s going to do [Craig] Ferguson, he’ll go on Twitter and say, “Hey, Browncoats, I’m going to be at …” and they all show up. I went down to Comic-Con – he is a rock star there. He loves his fans. He’s so good to them and I think he’s got a whole bunch of new fans. All my girlfriends like him.

AX: Are you a big fan of the sort of mystery novels written by Castle the character?

ZAKS: Well, I love James Patterson, but I’m also a big fan of procedural TV shows like LAW & ORDER. I think I’m a very typical procedural watcher, which is that thirty-four-year-old female who they love to watch. 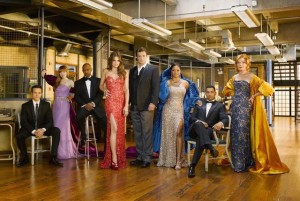 AX: CASTLE is the first procedural hit ABC has tried in awhile …

ZAKS: There hadn’t been a procedural that had really worked on ABC since NYPD BLUE. They were looking for one with [the potential for] their mark on it, and they were very involved with the development. They’ve been extremely supportive of the show. I think they were really looking forward to having a juicy procedural, but also that has a lot of character. This is not like CSI, where it’s about dissection, this is about character and people and stories, and not just who did it, but why did they do it. ABC has been great and extremely supportive. They have been behind this one hundred percent, promotion, support on the show – they’ve been wonderful partners.

AX: How early on was the decision made to give Castle a mother and a daughter, who are both regular characters?

ZAKS: It was part of the original concept of the show. First of all, we wanted to make sure that we would populate his world with a lot of women, because you know ABC really loves their gals, but also, we wanted to show that other part of him. We wanted audiences to see him being a dad and the mother part, was written with comedy in mind and comic relief.

AX: Is one of the functions of Castle’s relationship with his mother and daughter to show that these are women he’s respectful of, given that he is a bit of a player when it comes to his girlfriends?

ZAKS: Absolutely. People are loving [the Castle/Beckett] relationship, and we’re really building that and concentrating on that and his relationship with his family. And also there’s that mystery that has to be serviced every week.

AX: What is the division of responsibility between you and your fellow executive producer Andrew Marlowe?

AX: As far as what the mysteries in each episode are, do you license short stories out of anthologies or are they all invented in the writers room, or do you do the LAW & ORDER ripped-from-the-headlines thing?

ZAKS: We’re all original ideas – there may be some resemblances to something that may have happened [in reality], but they’re all really original. We have a team of writers and they’re very smart and they’re very creative. The mysteries have a little bit of a twist. If you remember in the pilot, Beckett was referred to as, “She likes the freaky ones.” And that kind of caught on. [The plots are] just a little askew.