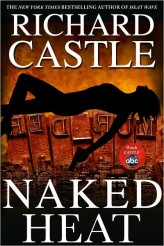 This is all very meta, so please bear with the following. In the ABC TV series CASTLE, Nathan Fillion plays superstar crime novelist Richard Castle, who follows around NYPD detective Kate Beckett (Stana Kovic) to get inspiration for his books. The hardcover novel NAKED HEAT by Richard Castle is ostensibly the second product of this inspiration (the first, HEAT WAVE, was released last year in paperback). It is a real book that you can go out and buy, with a picture of Castle – who looks just like Nathan Fillion – on the dust jacket and acknowledgements that include both Castle’s fictional mom and daughter and the CASTLE production staff.

NAKED HEAT feels very much like a CASTLE episode in written form. NYPD homicide detective Nikki Heat encounters superstar journalist Jameson Rook at a crime scene. Gossip columnist Cassidy Towne has been murdered and Rook is at her apartment because he was doing a profile on her. Heat is ambivalent about Rook, partly because his profile of her has brought a lot of unwanted attention and partly because they had a fling that went south. However, as Rook has invaluable information about the deceased, Heat winds up folding him into the investigation.

The wisecracking style of both Rook and Heat will be familiar to CASTLE fans, as will the regular supporting cast. There are Detectives Raley and Ochoa instead of Ryan and Esposito, Rook has an actress mom (though no daughter), etc. The book actually has some nice narrative flourishes that the sixty-minute episodic format doesn’t have time to explore, with subplots and thoughts. The romance between Rook and Heat is such that, if this is what Castle is writing, we can understand why the TV series’ Beckett is so exasperated with him so much of the time.

There are a few taps at the fourth wall, including a nod to Fillion’s beloved FIREFLY and comparisons between a situation in the book and the real-life Heath Ledger tragedy, but NAKED HEAT is consistent within its own universe. Rook is a well-described doppelganger for Castle, with the sort of emotions and inner monologues we are invited to imagine for the TV character, albeit a genuinely famous print-only journalist is a lot rarer than a genuinely famous novelist. For those who want to parse the book’s style, Heat is written in synch to the TV show’s Beckett, but with just enough admiring flourishes to suggest author Castle is utterly smitten with his subject.

As to who really penned NAKED HEAT, there may or may not be a clue in the acknowledgements at the end, purportedly written by – who else? – Richard Castle. Fans of the show who want to expand their love of CASTLE to the printed page should be entirely satisfied, as should readers who may never have seen the series but know a good popcorn book when they find one.