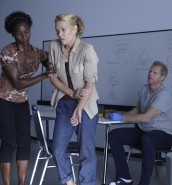 In the action-packed season finale of THE WALKING DEAD, Rick (Andrew Lincoln) and the group have found a temporary haven at the CDC, where Dr. Edwin Jenner (Noah Emmerich) is the lone survivor of the team that was attempting to find an answer to the horrific plague or – whatever it is – that turned the world into a zombie nightmare. Hot water and chilled wine offer a temporary respite from terror, but really folks, this is the last episode – how happy an ending do you think this is going to be?

Timely commentary on our world’s reliance on fossil fuels dovetails neatly with the episode’s exploration of our transitory lives and how important little things like love can be.

As alcohol loosens inhibitions we learn about Rick’s vulnerability as team leader and Shane’s (Jon Bernthal) desperate desire to regain Lori’s (Sarah Wayne Callies) attention. A flashback at the top of the episode tells us what we’ve already figured out – Shane is not the one-note villain he proved to be in the comic book. In fact, Bernthal’s performance has been one of the most pleasant surprises, offering many shades to a character that could have been clichéd. Although we now know he did try to save Rick, we also see him continue to struggle with his recent demotion to second-in-command. Who knows what the future holds as his rage grows?

Another satisfying departure from expectations is the character of Dr. Jenner. What could have been an easy choice – introducing a scientific authority figure only to reveal him as a “mad scientist” eager to experiment on our heroes – is instead employed as an opportunity to give the regular cast a chance to reflect on what they want – an end to the journey, or the chance to go on. One of the most painful aspects of this episode is that while Jenner offers only a painless death for the group, he’s not necessarily wrong. 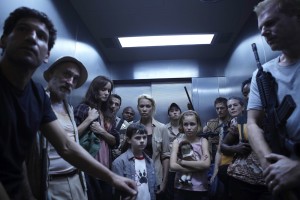 Once again we’re shown that the real monsters come not from without – the mindless walkers seeking human flesh – but from within. Our own fear, lust, anger; all these and more are the true enemies. One of the most powerful messages not just for this episode, but the entire season is how much we all want and need control over our own lives, our own destinies. Most of the group wants to risk the worst in order to see another day and strive for something better, while few would rather rest and see what waits on the other side. Both choices are valid, both choices are completely human.

The episode carries more than its share of emotional weight, but it also includes a few surprise twists that are in no way surprising. The identity of test subject TS-19 is predictable, and the survivors are improbably incapable of deducing what the ominous countdown clock indicates.

The place was designed to contain the worst diseases known (and unknown) to Mankind – come on, people, what do you think is about to happen? Besides, it’s the season ender, so naturally the likelihood of a hoary old action cliché is extremely high. For a show that has prided itself on finding the real human drama in a fanciful framework, it’s somewhat amusing that it all builds to a good ol’ big explosion where everyone and their vehicles implausibly survive intact.

In six episodes the series has captured much of what makes the zombie genre powerful and relevant, and there’s a long road ahead. Even as the survivors drive off into the sunset for a year, questions remain: Where did that helicopter at the beginning of the season come from, and where was it going? Whatever did happen to Merle Dixon? And what did Jenner whisper to Rick just before they escaped the ensuing fireball? It’s possible even the writers don’t really know the answers to these yet, but we’ll all have fun finding out when THE WALKING DEAD returns next October. See you then!