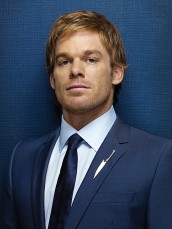 A good, tense episode that resolves one matter and leaves us hanging on for more

In the penultimate episode of DEXTER – Season 5, things come to a head, with Dexter (Michael C. Hall) discovering the surveillance equipment ex-cop Liddy (Peter Weller) has planted in his apartment. Wrongly believing the spy cameras were planted by Deb’s (Jennifer Carpenter) current partner/love interest Quinn (Desmond Harrington), “Hop a Freighter” has Dexter trying to catch him in the act. Instead, Liddy catches Dexter, but of course Liddy seriously underestimates the table-turning abilities of our guy.

Meanwhile, Deb’s investigation leads her to (rightly) believe that the vigilante she supposes to be killing the “barrel girl” murderers has the help of a devoted man. Lumen (Julia Stiles) receives a call from Jordan Chase’s (Jonny Lee Miller) other surviving victim, Emily (Angela Bettis), begging for help. When Lumen can’t reach Dexter on the phone (because Liddy has him tied up), she goes by herself to see Emily. Bad move, because Emily is helping Jordan – which doesn’t stop Jordan from beating Emily to death when she won’t stop talking. Dexter arrives on the scene to find Emily’s corpse – but no Jordan and no Lumen.

The big questions for the season finale next week is clear: can Dexter save Lumen and whether/how Dexter can prevent Deb from finding out what he and Lumen have been doing. On the one hand, it would be weird for the series to end two consecutive seasons with Dexter losing the woman he loves. On the other hand, will Lumen be a character who continues into Season Six? There are any number of ways this can go. The empathetic affinity between Dexter and Lumen is affecting – when Dexter tells Lumen that Deb wouldn’t understand because “she’s not like us” and Lumen responds, “Like us?”, we can tell how far they both have come in feeling they’re not entirely alone in the universe.

There’s a funny, touching scene between Dexter and Deb where Deb talks to Dexter about her theories about the vigilante who is taking down the “barrel girl” killers and waxes Deb-style poetic about how the man helping the vigilante must really love her and have her back, with Dexter silently taking this in.

Deb is on the receiving end of an unusually communicative speech from Quinn, who tells her why he loves her – Harrington does a good job of opening up his customarily terse character – and even LaGuerta (Lauren Velez) comes through in a surprising way.

On the downside, it looks like we’re not going to get any more clarity on Emily’s self-destructive devotion to Jordan, who has escalated into one of the most hateful nemeses in the history of DEXTER. Miller, who has demonstrated that he can be saintly and sweet on ELI STONE, shows that he can also convincingly portray a sociopath whose arrogance is as offensive as his homicidal tendencies.

With so much up in the air this week, the season finale promises to be quite a thriller.