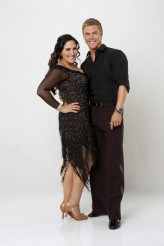 Ricki Lake is in the lead, while J.R. Martinez comes moves to the front as an early favorite

It’s going to be another tight race this season on DANCING WITH THE STARS. Seven, count them… one, two, three, four, five, six …seven couples are in the top three spots! That means not only could pretty much anyone make it to the finals, but that anyone could win this thing. The few weak links this week were David Arquette – poor guy he tried so hard to maintain his excitability, Chaz Bono – he just can’t move very well with injured knees, and Carson Kressley – he is fun and he is determined, in fact, Len Goodman said he rehearsed more than any other contestant this week. However, the hard work might not pay off with such low scores. Well, there’s always the audience vote to help the three struggling at the bottom.

Rob Kardashian (reality star) and his partner Cheryl Burke
He tried to let loose as best he could, that’s for sure. Goodman thought his Jive was a very proper one. Bruno Tonioli agreed, saying that Kardashian started to blossom. Carrie Ann Inaba stated it best, “Rob Kardashian is a better dancer than Kim Kardashian!”
Inaba – 7, Goodman – 7, Tonioli – 7, Harland – 6

Kristin Cavallari (actress) and her partner Mark Ballas
She was sharp and more relaxed this time around. Inaba thought she was stunning. Tonioli said her Quickstep was twinkling with pleasure. Goodman was somewhat pleased saying that it wasn’t as good as she looked.
Inaba – 8, Goodman – 7, Tonioli – 7 Harland – 7

Chynna Phillips (actress) and her partner Tony Dovolani
It’s quite evident that Phillips puts a lot of work into her dances. However, Goodman was disappointed calling her Jive good, not great. Tonioli thought there was a sexy siren in her somewhere. Inaba said she really enjoyed watching her dance.
Inaba – 7, Goodman – 7, Tonioli – 7 Harland – 7

Nancy Grace (TV host) and her partner Tristan Macmanus
After watching the video segment of her rehearsals, let’s just say I wouldn’t want to be her teacher of anything. Performance wise – she did much better and it showed. Goodman was over the moon about her traditional Quickstep. Tonioli thought it was a bit top heavy at times. Inaba wanted more raz a ma taz.
Inaba – 6, Goodman – 8, Tonioli – 7, Harland – 6

David Arquette (actor) and his partner Kym Johnson
FUN!!!! He danced a little spastically but he was so much fun to watch.
Goodman was not impressed; telling Arquette that any connection that dance had with a Jive was a coincidence. Tonioli thought Arquette was finally starting to find his persona in dance. Inaba found him to be letting it all hang out.
Inaba – 6, Goodman – 6, Tonioli – 6, Harland – 7

Elisabetta Canalis (model/TV host) and her partner Val Chmerkovskiy
She was definitely better than last week, but she seems to lack rhythm. Goodman was simplistic in his statements calling her Quickstep”not great”. Tonioli was encouraged and told her to keep working. Inaba was more enthusiastic, saying that she nailed the dance.
Inaba – 7, Goodman – 7, Tonioli – 7, Harland – 6

Hope Solo (Soccer Olympian) and her partner Maksim Chemerkovskiy
Her top and bottom halves seem to be dancing to different music. Goodman was semi-impressed calling Solo’s Jive shar, yet telling her she lost it a little bit. Inaba thought Solo finally learned to relax while dancing. Tonioli told her to be more precise next time.
Inaba – 6, Goodman – 7, Tonioli – 6, Harland – 7

Carson Kressley (fashionista/TV host) and his partner Anna Trebunskaya
No one can say he isn’t charismatic, and he is very awkward too. Goodman gave Kressley a backhanded compliment on his Quickstep, noting the worst dancers on this show are the most fun to watch. Tonioli thought Kressley was impersonating PeeWee Herman going to the prom. Inaba thought she saw some improvement form last week, although he was still a bit wobbly.
Inaba – 6, Goodman – 6, Tonioli – 6, Harland – 6

J.R. Martinez (U.S. veteran/actor) and his partner Karina Smirnoff
He has got natural talent. He is really good! Wow! He can move.
Goodman thought it lacked content. Tonioli said he was born to dance. Inaba thought J.R.’s Jive was fun and fabulous.
Inaba – 7, Goodman – 7, Tonioli – 8, Harland – 7

Ricki Lake (TV host/actress) and her partner Derek Hough
Lake kept up with Hough, very, very well. She had a lot of good energy. Goodman didn’t like parts of it. Tonioli was pleased with Lake, saying she was the first person this evening to do the kicks right in the Jive. Inaba proclaimed her Jive to be the best Jive of the night.
Inaba – 8, Goodman – 7, Tonioli – 8 Harland – 8

Chaz Bono (activist) and his partner Lacey Schwimmer
Bono did a very slow Quickstep. It was totally uncomfortable to watch. Goodman admired his grit and determination. Tonioli explained that there is a likeability factor about Bono. Inaba said she could actually see Bono writhing in pain.
Inaba – 6, Goodman – 5, Tonioli – 6, Harland – 6

Who will go home? – Likely Carson Kressley, although Chaz Bono did have the lowest scores. We’ll see tomorrow. Stay tuned!

UPDATE: Who was eliminated? CLICK HERE to find out