Home » TV Review: TWO AND A HALF MEN – Season 9 – “People Who Love Peepholes” 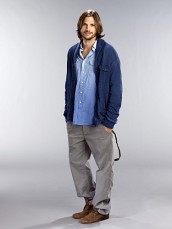 TV Review: TWO AND A HALF MEN – Season 9 – “People Who Love Peepholes”

Let’s face it, this is essentially a pilot episode for a brand new show – and it sort of works

While last week’s Season 9 premiere of TWO AND A HALF MEN was all about shedding the ghost of Charlie Harper (aka Charlie Sheen) from the series, while the second episode, “People Who Love Peepholes”, essentially serves as the official “pilot” episode for the show’s reboot.

It’s a brand new show, with actors getting accustomed to either their new characters or their new roles within the show. Some of it works, some of it doesn’t, but for better or worse, this is the “new” TWO AND A HALF MEN.

At the end of the last episode, internet billionaire Walden Schmidt (Ashton Kutcher) decided to buy Charlie’s old house. Now Alan (Jon Cryer) is homeless and has to go live with his mom. His mom provides Charlie-like humor with her amorous sexual adventures (and her safe words of “umbrella” during rough sex). That’s when Walden comes to save the day. He’s still depressed about his wife (Judy Greer) dumping him and needs someone to hang out with.

Naturally, Walden decides to go see his ex-wife who explains she dumped him because she’s tired of him being “Peter Pan” and not growing up. When Alan saves the day with Walden and his wife by episode’s end, Walden asks if he can do anything for Alan – and his reply involves asking Walden for a place to stay for awhile.

With all the pieces carefully put back in place (this includes Conchata Ferrell as Berta agreeing to be the live-in housekeeper), the show now can move forward with this new, slightly altered premise.

Several things are clear. Walden is the “half man” of the show – made very clear by his inability to grow up and his desire to grow up so he can stay together with his wife. And the relationship between Alan and Walden is different than Alan and Charlie. There’s more mutual respect between the two roommates, making this feel more buddy-buddy, than brother-buddy comedy.

The show also is relishing in having Kutcher naked every week, which frankly, is getting old real quick. It wasn’t funny last week, it isn’t funny this week.

There’s also some really weird homoerotic tension going on between Alan and Walden that results in them ending up naked on top of each other at one point during the episode. Again, not really funny – and rather uncomfortable and poorly conceived.

Then there’s Alan’s son Jake (Angus T. Jones) who is given absolutely NOTHING to do for the second week in the role. What’s up with that and are they going to bring him back into the fold soon. He’s sorely needed.

Kutcher settles into his Walden Schmidt role a little more seamless than he did last week, which alternated between ladies mind and idiot savant, and Cryer is still great as Harper. He even gets a great Molly Ringwald joke off that will please PRETTY IN PINK fans.

As I’ve stated before, I’ve never been the biggest TWO AND A HALF MEN fan, but it was pleasantly diverting when I turned it on. Sheen definitely made the show and his absence here is severely felt. However, if you accept that this is the “pilot” episode for a brand new show with familiar characters and a slightly skewered premise, it just might work.

Still TWO AND A HALF MEN has a long way to go to getting back on the right comedic path. It’s still stuck between two worlds (the old way and the new way) and once the writers figure out the right path, this new version could very well be a satisfying replacement. And if it isn’t, Kutcher just made a mint off a grand experiment in beating a semi-dead horse of a TV show into the ground.

Click On Link: TV Review – TWO AND A HALF MEN – Season 9 premiere – “Nice To Meet You, Walden Schmidt”

Article Source: Assignment X
Article:TV Review – TWO AND A HALF MEN – Season 9 – “People Who  Like Peepholes”