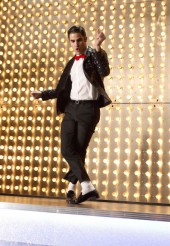 Not Bad, not good, just more Michael overkill than usual 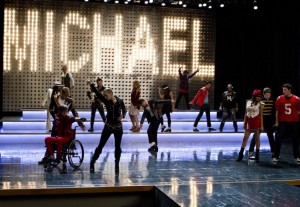 As far as ratings stunts go, “theme episodes” on GLEE are usually pretty impressive ratings getters. They’re also a breeze, writing-wise, since there’s so much effort put into cramming in more than the normal allotment of music in the episode, there’s less time to really flesh out the story elements as well as the show has done in the past.

With “Michael”, it’s all about Michael Jackson love (and product placement, with several mentions of the IMMORTAL tour, etc.).

And there are so many Michael Jackson songs to choose from, I have to admit, I was interested in seeing what was chosen and how they were used in the episode.

The end result – a mixed bag.

The story focuses on the rivalry between the Warblers and New Directions heading into Regionals. The new leader of the Warblers is cocky Sebastian (Grant Gustin) who has a major thing for Blaine (Darren Criss) and is trying to break him up with Kurt (Chris Colfer).

When the Warblers decide to sing Michael Jackson at Regionals, it puts New Directions on the defensive too who want to do the same thing.

Cue the song “Bad” which results in Sebastian tossing a rock salt laced slushee at Blaine (even though it was intended for Kurt). Blaine is out of commission and needs to get an operation on his eye (really, come on, super ridiculous). Meanwhile, New Directions wants revenge on the Warblers or proof that malicious intent took place.

Now here’s the thing that pisses me off. Sebastian is clearly a sociopath who purposely set out to hurt somebody with the rock salt slushee. New Directions gets proof of his malicious deeds but decides to take the high road and not give the evidence to the police?

Really? Blaine has a scratched eye and needs an operation – so you’re going to let him Sebastian stay in the Warblers and perform and you’ll revenge by beating the Warblers at Regionals. What’s the lesson in that?

Man, GLEE has certainly lived in a fantasy realm on many occasions, but this one takes the cake. None of it makes a lick of sense. Sebastian is bad news and crossed the line from just being a villain to being a criminal. If he does this, then he’ll do other things.

However, speaking for audience members, it’s nice to see Artie (Kevin McHale) give an empowered speech about not taking this abuse anymore. And it even segues into a fantasy sequence recreating the spaceship music video set piece from Michael and Janet Jackson’s “Scream.” This is the second time McHale has got to get out of the wheelchair and show off his dance moves (in this case opposite Harry Shum, Jr.). He’s fantastic. McHale also proves he’s one of the most underrated singers on the series. He handles Jackson better than any of them (and that includes Criss).

The episode kicks off with “Wanna Be Starting Something” and it’s one of the best moments of the episode (outside of “Scream”).

The “Bad” homage is a bit messy, the “Ben” number horribly bad with Blaine playing the part of the “rat” (I guess). Ugh! Never liked the song “Ben” and hated it more here.

I did think Sam (Chord Overstreet) and Mercedes (Amber Riley) did a really impressive rendition of “Human Nature” – they sounded great together. And the stripped down “Smooth Criminal” with Sebastian and Santana (Naya Rivera) was pretty impressive even if I was Jackson’d out by that point in the episode.

The conclusion resulted in a group sing with “Black or White” – and even had a fun face morph with the cast at the end.

Big story points this week had Quinn (Dianna Agron) getting accepted into Yale and thanking everyone for dealing with her being a bitch for three years. It’s clear that the writers have given up writing for Quinn. I feel bad for Agron, because she has more to offer than the show has given her (especially with the horrible storylines they keep saddling her with). My prediction is after this season, this is the last we’ll see of Quinn.

Meanwhile, Kurt and Rachel (Lea Michele) are both accepted as finalists into NYADA. And yes, we get an answer to Finn’s (Cory Monteith) proposal – she says “yes,” but it’s clear doubts are setting in.

GLEE has definitely picked itself up after an uneven Season 2 with a pretty solid Season 3. The series has thankfully stayed away from these theme episodes (for good reason) and “Michael” falls into some of the same traps that make them so hard and so frustrating and silly to do (even though the Fleetwood Mac RUMOURS episode last year actually worked in many respects).

The biggest issue with Michael, is Michael. AMERICAN IDOL, THE X FACTOR, THE VOICE – everyone is doing Michael Jackson songs. It’s getting annoying and overdone (much like the Beatles). I like GLEE when it branches out and does something like the RUMOURS episode or finds an unsung band and brings it to the forefront. Rehashing familiar pop standards from Madonna and Michael (and let’s prey The Beatles are NOT down the road) just feels tired and a bit overkill.